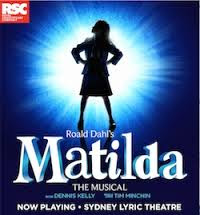 
When in 2000, Tim Minchin played a two-week season at the School of Arts Café in Queanbeyan as accompanist to Todd McKenney; he was unknown beyond his hometown of Perth. In the 15 years since, Minchin has become a household name as a charismatic cabaret artist, a compelling music theatre performer, a successful dramatic actor, and now as the composer of The Royal Shakespeare Company’s hugely successful production of the Roald Dahl musical, “Matilda” which has just begun its Sydney season.

Adapted by Dennis Kelly from Roald Dahl’s book of the same name, “Matilda” is a fable about a 5 year-old girl. Because of her insatiable reading habit, she’s unwanted and unloved by her own self-possessed family.  However, the local librarian, Mrs Phelps (Cle Morgan) can’t get enough of Matilda’s vivid stories and encourages her imagination.  Her gift is also noticed by her teacher, Miss Honey, who, herself, also had a difficult childhood. When Miss Honey invites Matilda to visit her in the shed she calls home, her touching ballad, “My House” inspires Matilda to be proud of her talents, and together with her class mates, stand up to the tyrannical headmistress, Miss Trunchbull (James Millar) in the show’s most memorable scene “Revolting Children”.

The material suits Minchin’s writing style perfectly. His lyrics are witty and fresh and his tunes immediately engaging, capturing perfectly Dahl’s idiosyncratic writing style. Although it’s tempting to attribute the show’s success to Minchin’s catchy songs, there are many more reasons which make this production an absolute “must see”.

Firstly, the show itself is among the more inventive and original musicals to hit the Australian stage in recent times. It has a cracker of a cast whose names you might not immediately recognise, but who bring freshness, wit and skill to their roles.


The direction by Matthew Warchus is masterful, creating a comic book world that stimulates the imagination and satisfies the intellect, while remaining at all times hugely entertaining.

The busy settings and costumes by Rob Howell are ingenious and colourful. Peter Darling has devised inventive, quirky choreography which is executed with admirable style and precision by the whole cast, children, as well as the adults. A number early in the second act, “When I Grow Up” in which the children take to swings to soar out over the heads of the audience is particularly memorable.

Sasha Rose played Matilda at this particular performance. She’s one of four Matilda’s, who share the title role at different performances. Her triple threat performance was very impressive. Blessed with superb diction, she sang and danced with all the aplomb of an experienced trouper, landed all her jokes successfully and had the audience in the palm of her tiny hand as she tugged on the heartstrings towards the end.

She received terrific support from the eight other young actors in her particular team, all of whom performed with admirable confidence and panache.

The adult actors are no less impressive in their ability to create larger than life characters that still retain a sense of humanity and believability.  As Matilda’s ferocious, self-absorbed mother- from-hell, Mrs Wormwood, Marika Aubrey, is a vision of splendid suburban tackiness. More interested in perfecting her dancing skills with her swarthy, “part-Italian” tutor, Rudolpho, (Travis Khan) than her housework, she perfectly fits her own description of herself in her big number “Loud”.  Mr. Wormwood (Daniel Frederiksen), Matilda’s father, is his wife’s perfect match, so disinterested in Matilda that he can’t even remember if she’s a boy or a girl, while her brother Michael (Daniel Raso) can’t drag his eyes away from the television even when he’s moving furniture around the room. All are believable caricatures that are both funny and sad at the same time.

None more so though than James Millar’s creation, the formidable headmistress, Miss Trunchbull, part Aunty Jack and part Les Patterson, gleefully terrorising her charges while still managing to elicit audience sympathy especially when she getting her well-deserved come-uppance at the end.
The only ‘normal’ character in the show is Miss Honey, who provides Matilda with the stability she is seeking, played with warmth and considerable charm by Elise McCann.

This is a show that is clever, anarchic, definitely not PC, but absolutely enchanting from beginning to end, capturing perfectly Roald Dahl’ s ability to subversively serve up important life lessons for both children and adults alike. It’ll have you rushing to your bookshelves to re-read your Roald Dahl, and even looking for an excuse to take the kids back for a second look.