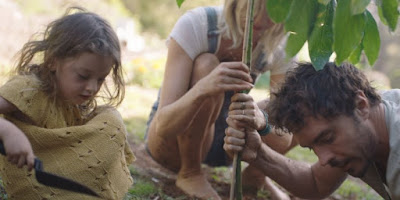 In a couple of decades, twentysomething Australians may be turning to their parents to ask: what were you thinking? why didn’t you do something?

Velvet Gameau is a likely exception. Her dad, Damon, has made this film, and the committed parent and high school science teacher in him has persuaded us to think again about what can be done about climate change.

Despite it being a key issue for voters at the recent federal election, it seems to have paralysed government as politicians duel for political ascendancy, though business is at least being pro-active.

2040 is based on ‘what if’. What if we adopted projects for combating climate change that are already operating, here and overseas, and made them mainstream? What if we grew well-being and health instead of inequality and pollution? These are simple and powerful questions.

Without hammering away at proving the issue exists, 2040 makes anthropomorphic climate change a given and demonstrates what can be done to help mitigate it.

Feeling helpless and hopeless is not an option for Gameau, an actor and activist filmmaker, whose feature documentary That Sugar Film in 2014 exposed the hidden sugar content in processed food, even food labelled healthy, and had a big impact here and overseas. Making himself the guinea pig to prove the thesis, he ate ‘healthy’, low fat food and within 60 days had acquired symptoms of liver disease.

Like then, like now, inaction is not an option for Gameau, and citizen activism the way to go. 2040 is structured around visits to experts and practitioners who are showing how practical measures can mitigate climate change. First stop on Gameau’s fact-finding tour is Bangladesh. Over there, de-centralised renewable energy micro-grids that connect household solar panels are opening up possibilities hitherto undreamed of.

The grid system explained by a 23-year-old Bangladeshi is impressive, underway, and one of the most striking take-home points of this ‘science lesson’. Universalising the education of girls is another.

A varied list of promising developments is presented that includes regenerative farming, greening inner city spaces, ride-share, autonomous electric vehicles, and farming fast-growing kelp to drawdown carbon from the atmosphere. And maybe eat it too. It’s all food for cautious optimism, and that’s not even taking Australia’s potential as a renewable powerhouse into account.

The thesis that we already have at our disposal the tools for a just and resilient zero-carbon economy underwrites Gameau’s vision for what the world could look like in 2040. He calls it ‘fact-based dreaming’, and it's a timely intervention among the ‘end of the world’ blockbusters that seem to have gripped our collective imagination. Apocalyptic dystopias give special effects and computer generation image artists exciting licence, but too often they run the show with spectacle taking precedence over plot and character.

Back in 2002 there was a moment in Rolf de Heer's The Tracker when Gameau’s docile character wrested control from rampaging fanaticism. Working with his own script and under his own direction, Gameau’s film 2040 is another surprising, spirited intervention.

The futuristic scenario in 2040 recognises the powerlessness and disillusion brought about by a lack of imagination, political will and leadership, and shows what can be done, and what is being done. Australians, especially young Australians, are likely to take this film to heart.

Jane's reviews are also published at her blog, the Film Critics Circle of Australia, and broadcast on ArtSound FM MHz 92.7
Posted by Canberra Critics Circle at 9:38 AM