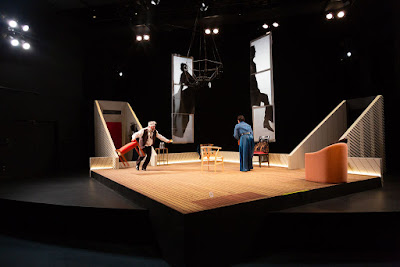 When Nora makes the shocking decision to leave her husband and children in the final scene of Ibsen’s “The Doll’s House”, a door slams and the curtain falls.  Lucas Hnath’s 2017 play “A Doll’s House Part 2 “ takes up where Ibsen’s left off;  with a knock on the door; the same door that was slammed shut 15 years earlier.

In Hnath’s imaginings, Nora is now a successful feminist author who, having discovered that her husband, Torvald, has never executed her promised divorce has returned to demand that he does. She faces recriminations from the housemaid, Anne Marie, who brought up her children, and from her eldest daughter Emmy, who’s engaged to be married. Nora’s demands also threaten to expose Torvald, who’s allowed his friends to believe that Nora had died.

Hnath’s play consists of a series of duologues in which the characters challenge each other, debating ideas of feminism, marriage, parental responsibility and fidelity.  Seldom do more than two actors occupy the stage at the one time. The arguments are fierce and fascinating. The script is sprinkled with disconcerting colloquialisms. Anne Marie declares herself “pissed off” at Nora, at one point.

Caroline Stacey’s gripping production embraces the anachronistic aspects of the script. Loud knocks at the beginning signal the first confrontation between Nora and Anne Marie. Played without interval, the five scenes are separated by thunderclaps of loud music. Lighting changes colours as the actors re-arrange the only furnishings – chairs - which Nora and Torvald hurl at each other during their final impotent confrontation. Actors drink from plastic water bottles during the play.

Imogen Keen has costumed the characters in handsome period costumes, although her striking setting is sparse and determinedly modernistic, dominated by two huge windows framing silhouetted figures - their backs to each other. The actors emerge and retreat through vomitoriums on either side of the stage, emphasising the gladiatorial aspects of the play. A platform which juts out into the auditorium allows the actors to address their arguments directly to the audience.

Though best known as a stand-up comedian, Rachel Berger proved impressive as Nora, commanding the stage with a steely determination to achieve her goals at all costs, making her response to Torvald’s final capitulation the more surprising. As Nora’s cuckolded husband, PJ Williams fascinated with his finely honed portrayal of Torvald’s inability to understand Nora’s frustrations, and Camilla Blunden captured the right blend of servitude, indignation and wariness as the housekeeper, Anne Marie, who finds herself unwittingly entwined in Nora’s tactics. Rounding out a fine cast, Lily Constantine, as Nora’s daughter, Emmy, unable to forgive her mother for deserting her, and fearful for her forthcoming marriage, is magnetic.

Lucas Hnath has devised a fascinating play, here given a compelling production. It illuminates Ibsen’s already intriguing characters and his ideas on burgeoning feminism. But does it also hint at yet another sequel ? Why else would Nora leave her coat and carpetbag behind when Torvald closes the door on her in the final scene ?
Photos: Shelley Higgs