Adapted from the Jane Austen novel by Kirsty Budding

There are a few boxes that need be ticked with good theatre. Atmosphere, lighting, a worthwhile text and good direction, and capable actors to pull it all off. Having ticked those, one of the highest achievements a good production can attain is the capturing of the audience's attention, and the keeping of it until curtain. This production achieved all this.

First and foremost the energy of the evening was youthful, excited, yet focused and charming. Bordered by the clever musical backdrop by Helen Way, stand out performances from a number of the cast kept you eager for the next moment. And that is the quality of Kirsty Budding's adaptation. She skilfully drew out the romance, beauty, drama and excitement as young men and women negotiated each other, and their time's social constructions, on their way to the hoped for denouement. 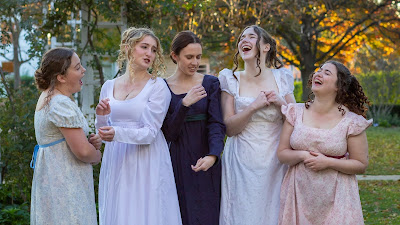 Budding, who also directed, gave audiences a treat with her colours, careful, artistic blocking and a range of devices employed to allow each actor to have their moment, and to shine. Tracy Noble played an absolutely convincing Mrs Bennet, Tabitha Lee as Lydia was a delight, and Rob Sheills as Mr Bingley gave some of the best foppish period acting I've yet seen on a Canberra stage. And the final scenes between a beautiful Elizabeth (Ella Horton) and staid, yet refined Mr Darcy (Callum Wilson) were simply sublime.

Though stricter pacing generally, and a greater attention to gesture, proper poise and posture among some of the gentlemen would have added final polish - Budding's joyous tableux, delicate emotional landscapes and sense of respect for her text likely made up for any lapses in form.

Ultimately, I left feeling uplifted, and over and above the things I've mentioned earlier - that is a certain sign that you've been well treated to a fine evening. Very fine indeed.

Posted by Canberra Critics Circle at 8:45 AM