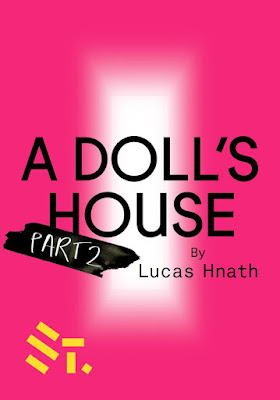 Ever since the door slammed at the end of Henrik Ibsen’s ‘A Doll’s House’ in 1879, the powerful play has continued to resonate with audiences around the world.  The study of a Norwegian woman, Nora, who breaks free of the restrictions of marriage in a male-dominated world to seek the self-fulfilment that has been denied her, is still remarkably valid today.

‘A Doll’s House, Part 2’ is American writer, Lucas Hnath’s day-dream about what might have happened to Nora after she slammed that door on her life.  The play had a respectable Broadway run in 2017 and was nominated for 8 Tony Awards including Best Play.  His play, ‘Hilary and Clinton’, is currently running on Broadway.

In ‘A Doll’s House, Part 2’, Nora returns to her husband’s home fifteen years later.  Self-assured and clearly prosperous, she nevertheless has a problem that requires a favour from her husband.  How will he respond to her request after all those years?

Without giving anything away, Hnath’s play poses an intriguing situation which involves Nora’s husband, Torvald, her aged former nanny, Anne Marie, and her now grown up daughter, Emmy.  The bitter memories of the past rise quickly to the surface and create an explosive tension.

Hnath’s play provides rich characters for the four actors.  As expected, Nora is now nothing like the woman we knew from the original play.  Rachel Berger gives a believable performance of a strong, confident woman who still carries some baggage from the past.  PJ Williams displays a real depth of feeling in his performance as the damaged Torvald who is still bitter about the break-up of his marriage.

Camilla Blunden gives a finely nuanced performance in the role of Nora’s former nanny, Anne Marie, and Lily Constantine as Nora’s grown up daughter, Emmy, is excellent as a young woman who displays the strength and self-assurance that her mother was incapable of during her marriage.

The attractive setting and fine costumes are by Imogen Keen.  They are complemented by a subtle and effective lighting design by Gerry Corcoran.

There are jarring moments in Hnath’s script where the actors use four letter words as well as other modern day expressions.  The actors drink from plastic bottles of water occasionally and there are other non-verbal and musical anachronisms as well.  I suppose this is a device to show that a play set in 1894 still has contemporary relevance but it’s not subtle and reduced the believability of this period story.

Overall, the director, Caroline Stacey, has given this intriguing play a handsome production with fine performances.

Len Power’s reviews are also broadcast on the Artsound FM 92.7 ‘In the Foyer’ program on Mondays and Wednesdays at 3.30pm.
Posted by Canberra Critics Circle at 10:38 AM