Any film with Judi Dench commands attention. She has brought a mix of authority, vulnerability, and humour to every role, from James Bond's boss, M, to author Iris Murdoch, to a couple of Queen Victorias, to older women who age disgracefully or with regret. It seems we are still up for more, even while Dench is in her mid-80s.

In Red Joan, directed by veteran theatre director Trevor Nunn, she is a Soviet spy working against British interests, a tricky part to play sympathetically. When M15 bursts in on the retirement she spends gardening and painting and begin quizzing her, it is hard not to feel outraged for her character, Joan Stanley. What could such a homely, gentle woman have done to deserve such treatment?

the spy who inspired this film, the late Melita Norwood, was a lot clearer about where she stood


The interrogation immediately plunges into her past, shown in extensive flashback as actor Sophie Cookson takes over as young Joan, a student of physics at Cambridge in the 1930s.  She falls under the spell of a pair of fervent young Communists who seduce her studious young self with their flamboyant foreign ways. The attempted induction at a screening of the propaganda masterpiece, Battleship Potemkin, where Sonya (Tereza Srbova) introduces Joan to Leo (Tom Hughes), is not successful. Joan falls in love, but does not become a party member. 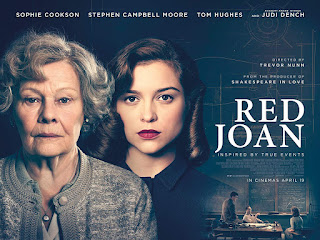 As young Joan, Cookson makes an appealing, intriguing character, a scientist who leads with heart and mind.

After graduating with a first, Joan lands a job with a team engaged in top secret nuclear research, the Non-Ferrous Metals Research Association, based in London. It’s a secretarial and admin position, until her bosses discover - in one of several toe-curling moments - she can actually make a contribution to the science.

While in thrall to Leo, she copies secret material about the development of the atomic bomb for passing on to the Soviet Union. She also has an affair with her insipid, married boss, Max (Stephen Campbell Moore).

The flow of secrets to the Soviets continued and she managed to avoid detection for nearly 40 years until finally arrested in the  1990s. She admitted what she had done and remained unrepentant, declared her internationalist outlook was founded on a level playing field that would give the Russians and their new system an equal chance. Eventually, the British government released her without charge.

The Soviet spy who inspired this film, the late Melita Norwood, was a lot clearer about where she stood and was indeed a member of the Communist Party. She also had a daughter, not a barrister son who stood by her as the film imagines.

Unlike ‘red Joan’, Norwood did not study physics, nor go to Cambridge. She studied Latin and logic briefly at the University of Southampton, which the filmmakers may have decided was not quite as picturesque. At least the look of this British period drama, the sets and costumes, is impeccable.

Yet the effort is misplaced. If the film had stuck to the true story of the Soviet’s longest serving British spy, who passed top secret information to the KGB from the 1930s until the 1990s, that would have been a better bet.

Something far closer to the truth deserved to be told. There is a fascinating true story of Melita Norwood that the film gives little credit to, and it won’t be surprising if you feel you have been had.

Jane's reviews are also published at her blog, the Film Critics Circle of Australia, and broadcast on ArtSound FM 92.7 MHz
Posted by Canberra Critics Circle at 3:02 PM