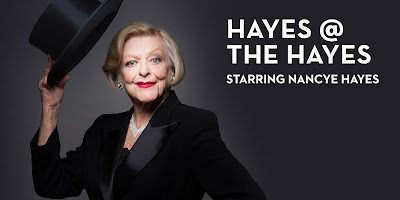 If any justification was needed as to why she has a theatre named after her, then this meticulously crafted, superbly performed, gem of a show provides it all.

When contacted by David Campbell to ask if she would agree to have what is now the Hayes Theatre named after her she replied incredulously, “Are you sure?”  Now, five years on, she still professes awe at the honour.

It would have been easy for her to cobble together a collection of her greatest hits from the myriad of shows in which she has starred. But forever the perfectionist, she asked her close friend, Tony Sheldon, to write the show for her, remarking wryly in acknowledging his contribution, “He probably knows me too well”. (Sheldon also wrote her 1991 one-woman show “Nancye With an E”, which is preserved on CD as “Nancye Hayes at The School of Arts Café”).

Drawing on his encyclopaedic knowledge of show tunes, Sheldon has come up with a song list for this show which comprises mostly songs from shows in which Hayes hasn’t appeared. Most are little known songs from obscure musicals, but each artfully chosen, to allow her story to be told through them.

Commencing with “If They Could See Me Now” from “Sweet Charity” not sung as Charity Hope Valentine, but as a reminiscence of her childhood and family. For many years Hayes has lived in a heritage apartment building very close to the Hayes Theatre so “Home” from “The Night They Raided Minsky’s” and Carole King’s “Up On the Roof” allow her to reflect on the changing face of Kings Cross recalling venues like The Chevron Hotel, Les Girls and the Bourbon and Beefsteak Hotel, and celebrity friends associated with them such as Carlotta and Sheila Cruz, and June Bronhill, about whom she shares a particularly cheeky recollection.

Recalling dancing in her room to her prized collection of World Record Club Broadway show albums provides a highlight dream dance sequence in which she sings and dances to a clever mash-up of grabs from a dozen or more Broadway shows with nods to the choreography of Bob Fosse (“Sweet Charity”), Jerome Robbins (“West Side Story”) and Michael Bennett (“A Chorus Line”) along the way.

“I Do What I Can With What I Got” from “Paper Moon”, and “Time Machine” from “Half Time”, allow her to revisit many of the characters she has played over the years, among them Liliane La Fleur (“Nine”), Roxie Hart (“Chicago”), Madame Armfeldt (“A Little Night Music”), and Miss Hannigan ( “Annie”).

Recollections of appearing in the Australia Premiere production of “Chicago” in 1981, in which she played Roxie Hart to Geraldine Turner’s Velma Kelly, leads to a particularly poignant moment, as she reveals that it was during that production that she fell in love with her husband, legendary saxophonist Bob Bertles, who then joined her onstage for a lovely arrangement of “My Foolish Heart”.

There are so many lovely moments to savour in this superb cabaret. To describe too many of them would deprive you of the joy discovering them for yourself…which you really must.

Directed with taste and elegance by Jason Langley, “Hayes@ The Hayes” is performed on a simple, elegant setting, sensitively lit by James Wallis, dominated by two large portraits of Hayes. One is a publicity shot for the 1967 Australian production of “Sweet Charity”, and the other, a 2019 portrait by John Klein. Both capture different aspects of her personality.

A comfy arm chair and a stool provide the only props besides a top hat and cane sitting on the baby grand, from which the marvellous Michael Tyack, together with bass player, Dave Ellis, provide impeccable accompaniments.

Looking svelte and stunning in a black sequinned pant-suit, Nancye Hayes radiates star quality in spades. Her natural warmth, plus a life-time of performance experience, disguises the complexity of the material so that the whole show feels like a personal chat with a bestie.

It’s a rare privilege to have the opportunity to experience a performance by an artist in a venue named after that artist. This show offers that opportunity.  “Hayes @ the Hayes” is not only an experience to be cherished by admirers of the peerless Nancye Hayes, but one which should be on the “must see” list of any artist contemplating an autobiographical cabaret. This is a gold standard example.

The short season will no doubt prevent as many people experiencing it as should. Hopefully it will be filmed, not only to preserve a remarkable performance representing a lifetime of theatrical achievement, but also to be enjoyed by future generations to whom the name Nancye Hayes is destined to become as legendary as Nellie Melba.