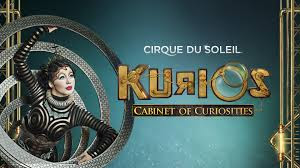 When you go to a Cirque Du Soleil show there is an expectation that you will be wowed by the brilliant acrobatics, colourful costumes and superb presentation. With Kurios – Cabinet of Curiosities, Cirque have raised the bar to an astonishing level.

Visually different from their previous shows, Kurios – Cabinet of Curiosities transports its audience into an extraordinary steam-punk future past world in which, according to the massive souvenir program, “a Thomas-Edison-meets-Jules-Verne retro-future that is now or never”. Make of that what you will, but it does provide an excuse for the designers to let their imaginations run riot to create an amazing assortment of extraordinary inventions to boggle the minds of their audiences.

The costumes are no less extraordinary, including those for a group called Visitors from Curiosistan, led by Chercheur the Seeker (Renald Laurin) a sort of Ringmaster who controls the action with his band of exotic “Visitors” who include an  impossibly stout gentlemen, Microcosmos,  (Mathieu Hubuner)  whose huge stomach is inhabited by a tiny soul called Mini Lili (Australian artist Rima Hadchiti) who during the course of the show leaves her abode to join Nico the Accordion Man (Nico Baixas), whose costume appears to be made from accordion bellows, and Klara (Kazura Ikeda) who wears a hoop skirt of suspended circles.

Throughout the performance these characters lead a marvellous strolling band which includes a glamorous chanteuse, Sophie Guay, and hordes of fantastically costumed characters who provide an ever-changing kaleidoscope of mobile scenery to cleverly disguise the set-ups for a series of seriously impressive  feature acts.

Some of these  acts appear familiar, but draw gasps when they are pushed beyond what seems humanly possible. A troupe of contortionists resemble wriggling sea creatures as they perform tightly choreographed contortions on a slippery mechanical hand. Muscular twins, Roman and Vitali Romanov, gracefully swing out over the heads of the audience, before drawing gasps as they narrowly avoid collisions as they swing through each other’s straps.

Trapeze artist, Anne Weissbecker, performs breathtaking manoeuvres on a vintage bicycle suspended high above the heads of the audience, and hand balancer, Andrii Bondarenko, builds a mountain of chairs, only to be met by a mirror-image version being constructed upside down from the ceiling.
A team of aerialist decide to do away with trapezes and turn the safety net into a huge trampoline from which they propel themselves to breathtaking heights as they perform disciplined unison acrobatics.

Among the more unusual acts is the invisible circus, “the greatest show you’ve never seen”, in which invisible performers perform stunts on teeterboards, tightropes and trapezes, before an intransigent lion gets out of control. True !..You have to see that for yourself to fully appreciate it … and another in which performer’s fingers are projected onto a huge balloon to create a romantic story. At times there is so much going on that it is difficult to decide where to look.

Certainly one of the best Cirque du Soleil shows to visit Australia, Kurios – Cabinet of Curiosities with its huge cast of superb performers, extraordinary production values and inventive presentation is one Cirque show you’ll kick yourself if you miss.


Posted by Canberra Critics Circle at 7:36 AM