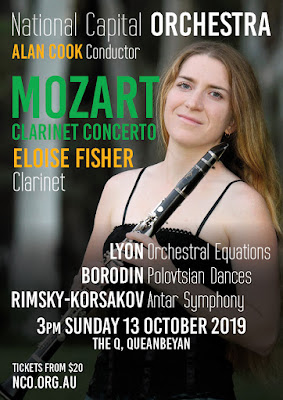 The National Capital Orchestra presented a very enjoyable program of four works that took us from modern day Australia to Europe and Russia of the 18th and 19th centuries.

The program commenced with ‘Orchestral Equations’ by Melbourne-based composer May Lyon whose music explores themes from deep human emotions, history and mythology, through to mathematical concepts.  In three movements, ‘Orchestral Equations’ is described as a symphonic poem loosely based on the solving of a 17th century mathematical riddle.
The first movement gave a fine sense of working on and edging towards a solution but never quite getting there.  The slower second movement had a grandeur indicating the slow passing of time and progress over the centuries until the third movement where the music indicated the mathematical solution had been found.  It was accessible, evocative music and it was played well by the orchestra.  Composer, May Lyon, was in the audience and took a bow at the end of the performance.

Eloise Fisher then joined the orchestra to play solo clarinet for Mozart’s Clarinet Concerto in A.  She is the winner of prizes from numerous prestigious competitions in Beijing, London and Paris.  She received her Doctorate in Musical Arts from The Juilliard School in New York and is on staff at the ANU.

After interval, the program continued with two works by Russian composers.  The Antar Symphony by Rimsky-Korsakov, composed in 1897, is an atmospheric work set in Arabia and based on a story from the collection ‘The Fantastic Journeys of Baron Brambeus by Osip Senkovsky.  It’s a colourful work full of the mystery and atmosphere of the Middle East and the orchestra gave it a very fine performance.

The final work, Borodin’s Polovtsian Dances was first performed in 1890.  Written for the opera ‘Prince Igor’, this evocative work is a staple of the concert stage.  Passages of the work have also become very familiar since the early 1950s when they were used as a basis for songs in the successful Broadway musical, ‘Kismet’.  The orchestra played the work very well, bringing out the passion and drama of the music very nicely.  It was a great finale to a very pleasant afternoon concert