In 2017 playwright and director, Kuro Tanino brought his company, Niwa Gekidan Penino to perform The Dark Inn, an epic piece that probed the human psyche through the lives of various characters who reside at a provincial hot spring inn. Tanino revisits the recurring leitmoitf of consequential transformation in his latest offering, The Dark Master. Like The DarK Inn, Tanino’s The Dark Master is concerned with the impact of change on the individual and society.


Tanino again sets his play in an isolated prefecture of Japan.  A Tokyo backpacker arrives at an empty bistro in search of somewhere to eat and is confronted by a world-weary and dismissive owner who has been at the bistro for thirty-five years through boom and bust. An attempt to leave is thwarted when he finds the door locked and the intentions of the owner begin to become clear. He is looking for someone to take over his bar and teach the art of cooking in the traditional style. This is where Tanino’s play takes a fascinating twist. The innocent, naïve young traveller is given earphones to communicate with the master, who retires to his upstairs living quarters not to be disturbed and only to be communicated with through a microphone. The scene is set for the education of his unwitting apprentice.


“It’s just like the bistro I visited last year” my companion said. Takuya Kamiike has replicated a real bistro with an unerring eye for detail that includes a fully equipped stove and utensils. As the owner issues instructions through the earpieces and follows his actions through cameras planted throughout, the young apprentice embarks on a wild education as his first customer orders onuri rice, which the traveller prepares before our eyes. The young man’s success fires enthusiasm and gradually he becomes equipped to serve different dishes to an ever-increasing clientele. Tradition infuses the new generation with understanding and purpose through the master’s manipulative instruction.


As if watching a cooking show in progress, a central video screen shows the actual preparation of various dishes while surtitles flash onto the side screens. The master’s instructions and reactions to the young man’s excited , nervous or confused comments continue through the earphones that have been supplied to audience members, totally engaged by the visual action on stage and the aural, disembodied voice of the previous owner. 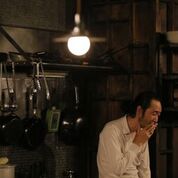 Comedy turns to ominous awareness of the perilous rite of passage that unfolds. As the popularity of the bistro grows, so does the young man’s journey into the dark experience of his instructor, Innocence is tarnished by the sweetness of success and the overpowering suggestion of the master who leads his victim to loss of innocence and the master’s impression of a real man, experiencing alcohol, smoking and sex with a local prostitute. “Now you are a real man.” the voice proclaims proudly.


Tanino, a former psychiatrist, directs with an insightful appreciation of the nature of power, persuasion and the human psyche. He infuses his actors with instinctive truths, eliciting strong performances from his actors. There are excellent performances from Susumu Ogata as the Master, whose sinister intent to restore the traditional reputation of his bistro transforms innocence into the pain of experience, captured in a thoroughly believable performance by Koichiro F.O. Pereira as the Young Man. There are also strong performances by Hatsune Sakai as the Sex Worker and Masato Nomura as the violent Chinese Man. The reference to the bitter antagonism between the two nations is inescapable.


Performed in the intimacy of the Adelaide Festival Centre’s Space Theatre, The Dark Master draws us in to Tanino’s prophetic parable of lost innocence. Tradition has maintained its powerful influence while the new and aimless generation is guided towards a controlled and authoritative existence. Tanino’s warning provides food for thought to a discerning palate.

Posted by Canberra Critics Circle at 10:06 AM