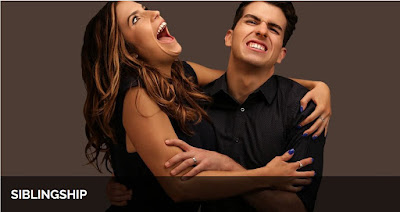 Accentuate the Positive is one song from a much earlier generation that these twenty-something performers could have used to highlight their theme.  The audience at The Q was up for it.  It was a standing ovation for a humorous celebration of a loving sibling relationship.

The story of their dancing lives began on amusing slides and video-clips from their births and took us through to the present time, as they re-enacted themselves at home (Italian) and on stage in Western Sydney talent quests and by invitation at all kinds of social occasions, including weddings.  Choosing the right songs for weddings – and rejecting the wrong ones – was a nice satirical number.

While they were amazingly able to fling themselves and occasionally each other around the stage as the video showed them doing as children, the story has its strength in illustrating the process of growing up.  Family (Italian) held everything together for them until the time came for Daniel, now married to Tobias who has written this show, had to reveal (on an answering machine voice message!) to his mother that he is “a little bit gay”.  For Chiara, her older brother leaving to go on tour on his first professional engagement, just as she was finishing high school, was an emotional loss.

The take home message, though, was that ‘siblingship’ is stronger than parental and conventional expectations – it’s about love and protection of each other.

It’s awkward for me to review this show in the way I would for a fictional drama.  Playing themselves in their true story – their love for each other which concludes their performance is surely real – stops me from suggesting that the ending is hopeful for the characters but doesn’t guarantee such a perfect relationship forever.

Yet the idea of writing their story and presenting it on stage – where, as we know, ‘theatre is illusion’ – puts the show into a category which I have previously called Theatre of the Personal Self.

Two recent examples that Canberra and Queanbeyan people will remember are My Gurrwai by Torres Strait Islander woman Ghenoa Gela and Red by Liz Lea.  In this category, Siblingship, though highly entertaining and full of positivity, and therefore very well worth enjoying, is a much lighter piece from a dramatic point of view.

And, of course, there is plenty of room on stage for light entertainment, especially when it is as well choreographed, musically put together and performed as by Chiara and Daniel Assetta – siblings extraordinaire.

Posted by Canberra Critics Circle at 10:15 AM