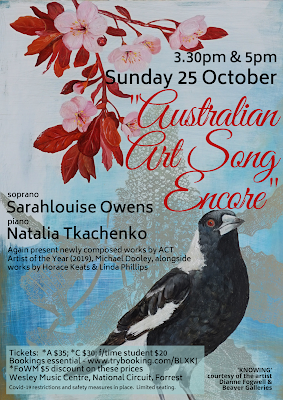 An inspired idea for a program of art songs, Sarahlouise Owens, soprano, and Natalia Tkachenko, pianist, presented a set of songs by Australian composers.

Canberra composer, Michael Dooley, was represented with songs of well-known poems by John Keats.  There were also two Hebrew songs by Linda Phillips and a set of romantic songs by Phyllis Batchelor.  Songs by Carl Vine and Horace Keats were also included.

Her accompanist, Natalia Tkachenko, graduated with honours from the Moscow State Institute of Music and worked extensively in Moscow, France, Germany and South Korea before residing and working with the ANU School of Music in Canberra.

The concert commenced with three poems by John Keats with music by Canberra composer, Michael Dooley.  These descriptive poems were given highly visual music, enabling Sarahlouise Owens to show the wide range of her voice as well as her dramatic presentation abilities.  ‘To Autumn’ and the final part of ‘Ode On A Grecian Urn’ were the highlights of this set.  Natalia Tkachenko gave an especially sensitive accompaniment on piano for ‘To Autumn’.

Both Linda Phillips and Phyllis Batchelor were prominent in Australia’s music scene in the last century and their compositions should be better known.  The two songs by Linda Phillips in this concert – ‘Ash Trees’ and ‘The Golden Bird’ were colourful with positive sentiments that were sung with brightness and joy by Owens.

The set of romantic songs by Phyllis Batchelor were given a heart-felt performance by Owens.  ‘Jacaranda tree’ was especially tenderly sung and given a fine accompaniment by Tkachenko.

Carl Vine’s confidently romantic declaration, ‘Love Me Sweet’, was a nice contrast to the sweeter Batchelor songs and the set of songs by Horace Keats created a fine atmosphere of quiet and reflective emotion.  ‘The Point Of Noon’ was the highlight of this set.

The program finished with a return to the poems of John Keats with Michael Dooley’s composition to ‘Ode To A Nightingale’.  This lengthy song covers the full range of emotions, giving the singer great opportunities to display their skills.  Owens gave a moving performance of this work that proved to be the highlight of the whole concert.

Posted by Canberra Critics Circle at 9:43 AM