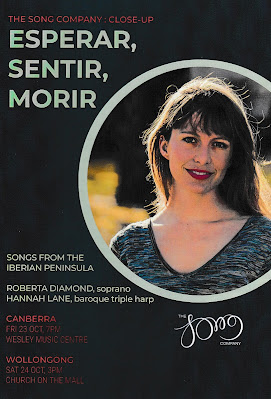 “Esperar, Sentir, Morir” (to hope, to feel, to die) are the words of the song giving this concert its title.  The program explored music of the Iberian Peninsula and its influence throughout Europe.  Many were romantic works exploring the many emotions associated with the joy of love and the pain of its loss.

Traditional melodies from the Sephardic diaspora were intertwined with theatre music from the Spanish Golden Age and popular compositions that travelled around the world.

Soprano, Roberta Diamond, specialises in the interpretation of medieval, renaissance and baroque music and has enjoyed a busy international career.  Hannah Lane, on baroque triple harp, performs regularly with many leading ensembles throughout Australia and Europe.  The combination of these two artists produced a sublime evening of memorable music.

The concert commenced with Roberta Diamond singing a capella off stage before making her entrance.  The sweetness and clarity of her voice was astounding as she sang this haunting 13th century love song by Martim Codax.

She and Hannah Lane then presented a large program of songs from across the centuries by many composers as well as traditional Sephardic melodies of great beauty.  That most of these were unfamiliar works simply added to the enjoyment.

Hannah Lane also performed several works solo on the baroque triple harp.  The harp has three parallel rows of strings instead of the more common single row.  The pensiveness of “Ancor che col partire” (Even with leaving) by Antonio de Cabezón from the 16th Century was especially beautiful.

Amongst the highlights of the songs sung by Roberta Diamond and accompanied by Hannah Lane were “Sé que me muero” (I know I’m dying) by Jean-Baptiste Lully and the haunting “Aura tiema, amorosa” (Tender, loving breeze) by Juan Francisco Gòmez, both from the 17th Century.

The performers spoke to the audience at length about the works they were performing but the acoustic in the church made it very difficult to hear what they were saying.  A microphone would have helped.  Hannah Lane re-tuning the harp while Roberta Diamond was speaking made it even more challenging to hear what was being said.

Nevertheless, it was the music that was the focus and the audience was clearly charmed by these superb artists and their excellent program.

This review was first published in the Canberra City News digital edition of 24 October 2020.

Posted by Canberra Critics Circle at 9:36 AM