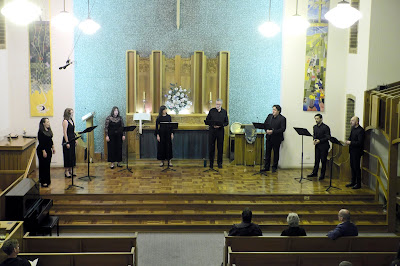 Since 2013, Luminescence Chamber Singers have gained a reputation for fine singing and innovative programs.  Generally singing unconducted and unaccompanied, they perform a wide range of repertoire from the Renaissance to the 21st century.

The eight singers in this concert all have a formidable list of credits and are regularly heard in concerts in and around Canberra.

The program commenced with Arvo Pärt’s work, ‘By The Rivers Of Babylon, Where We Sat and Wept’.  The ensemble was accompanied by James Porteous on the organ.  This minimalist interpretation of Psalm 137 was a good choice as a first item as it gave the singers the opportunity to show their skills individually and as a group.  The atmosphere created by their controlled and accurate singing was very impressive.

‘Lamentations of Jeremiah’ by Thomas Tallis was composed in the late 16th century.  The text is from the Book of Lamentations, ancient biblical poetry that laments the destruction of Jerusalem in 586 BC.  It was a good contrast to the contemporary work by Arvo Pärt and the singers gave it a fine performance with notable clarity between the individual voices.

The three parts of ‘Exile Lamentations’ by Australian composer, Paul Stanhope, are also based on the Book of Lamentations of Jeremiah.  This complex work was given a memorable performance by the singers.  The dramatic and powerful sections of the second part, ‘Deserts of Exile’, were especially well sung.

Meta Cohen’s ‘Sim Shalom’, followed.  This Jewish prayer for peace, sung by the male voices only, has beautiful introspective passages which were sung with great sensitivity by the singers. The last work, ‘And the Swallow’ by America’s Caroline Shaw, continued the theme of the hope for peace and was the perfect finale to yet another fine concert by the Luminescence singers.