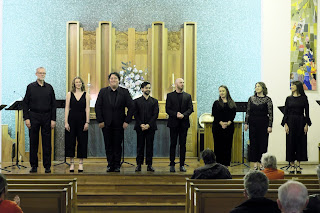 WHAT a great joy it was to go to my first live music concert since the beginning of the Covid 19 restrictions this year – and what a perfect concert it was to lift the spirits and stimulate the mind.

The ensemble is to be warmly congratulated for producing a program to bravely explore the theme of exile and to express the emotional revelations within their choice of transcendent choral music.  Luminescence’s mission statement is doubly relevant in this tumultuous year: ‘to give voice to human experiences of all kinds, to uplift audiences, to champion the vocal arts, and nurture Canberra’s creative life.’ The 9-voice ensemble performed a program encompassing music across the ages from the 16th century to the present, delving into the deep mysteries of grief, yearning and enduring hope associated with displacement. For many of us in 2020 the experience of separation from beloved people and places has become a challenging reality and the music performed by Luminescence had a particularly profound intensity. The choir magically balanced and merged the voices of its talented singers, while allowing us to hear the distinctive flavours of the individual voices.

Arvo Pärt’s heart breaking An den Wassern zu Babel filled the Church with the sparse, sorrowful sounds derived from the Kyrie eleison (heard at the opening of the mass) translated into a universal outpouring of suffering underpinned by enduring hope. As the program notes observed, ‘Vocalisation is our vessel for the most basic and innate forms of human communication’ and the choir certainly interpreted Pärt’s incomparable compositional technique in a moving performance to open the heart.

Tallis’s Lamentations of Jeremiah are built on the foundations of English ecclesiastical music and create a glorious vocal structure in complex renaissance polyphony. This is the music offering the comfort of ages while describing the human predicament of loss and longing. The Lamentations was divided in the concert by Paul Stanhope’s Exile Lamentations – a clever piece of programming that drew the audience across the centuries into the current day before returning us to reflect again on the timeless nature of the profound meditations expressed in Tallis’s setting of the biblical text. Stanhope’s work is not easy listening – but this is his intention, to use uncomfortable sounds to make us feel deeply the visceral force of dislocation from home and loved ones amidst the destruction of war.

A lighter, more joyous plea for peace was voiced in Meta Cohen’s setting of Sim Shalom, navigating the alternating introspective and emphatic expressions of an age-old Jewish prayer to reach a final point of musical equanimity. Caroline Shaw’s And the Swallow made an exquisite finale for the evening, with Chloe Lankshear’s pure soprano soaring effortlessly, creating a vision of a sanctuary in a turbulent world.

In giving voice to the depth of grief experienced by humanity expressed in music across time, Luminescence has also shown us how to transcend despair in the interactive exchange between performers and audience: truly a concert for our times.