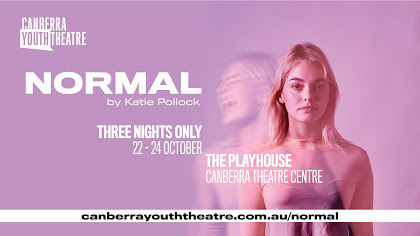 The title of Katie Pollock’s play Normal begs the question “What is normal?” In a bold and impressive move, Canberra Youth Theatre’s Artistic Director Luke Rogers has brought Pollock’s probing question from company’s customary intimate theatre space at Ainslie Gorman Arts centre to the expansive and fully professional stage of the Canberra Theatre Centre’s Playhouse.  It is a challenge that the company and Youth Theatre’s four young actresses embrace with vigour and assurance in a performance that is confident, authentic and at times profoundly moving.

Central character, Poppy  (Holly Ross) has developed  impulsive and uncontrollable vocal and physical reflexes  that offer no medical or scientific explanation.  Pollock constructs an intriguing investigation of the impact of Poppy’s disorder in short scenes that examine Poppy’s relationships with her friends, her mother , her friends’ mothers,  a shop attendant, a psychiatrist, a school counsellor and a television reporter.  The three other female actors double up as Poppy’s school friends and the adults in Pollock’s  exploration of the condition’s causes and the attitudes of the characters as Poppy’s best friend, Sky (Elektra Spencer) gradually distances herself for fear of contracting the ”disease” . Accusations fly from Sasha’s frightened mother Ms Holt (Jemma Collins) and Poppy’s mother (McKenzie Battye-Smith) desperately struggles to maintain normality as her world appears to crumble about her and she is powerless to find a solution to the situation. Professionals, psychiatrist Sheila and school counsellor Lucy cling to a pragmatic explanation that offers some hope of a cure for this abnormal affliction. Questions demand answers as Poppy’s condition becomes more and more acute. In a puzzling turn of events the questions become even more significant as Poppy’s friends develop the same mysterious “illness” and Pollock’s scenario turns into an absorbing detective investigation that poses more questions and eludes any confirmed closure to the case. Rogers’ direction is methodical, eliciting excellent and thoroughly convincing performances from his ensemble cast, while ensuring that the pace and impact of the work keeps the audience on tenterhooks in the quest for some satisfying explanation. Gillian Schwab’s setting and lighting design offer opportunity for clear deduction , complemented by Kimmo Vennonen’s punctuated sound design. And so the questions continue. Is Poppy’s condition the consequence of teenage anxiety and fears, of doubts and conflicting perceptions of friendship and peer pressure?  Has fear and confusion distorted body and mind connection and balance? Or is it Psychological Conversion Disorder as the psychiatrist would have us believe? Or could it be a contagious disease, spreading with human contact? Maybe it is the toxic waste that now seeps to attack the students at one particular school. Or is it a manifestation of a troubled mind?

The answers are elusive, but what is clear in this excellent vehicle for these young actors and their audience  is the trouble and the torment that young people  on the brink of adolescence face in their daily lives, both the imaginary and the real.  The harmful impact of  social media and the terrifying exposure to trolling play their part in this sobering account of the terrors that confront Poppy and her peers.

At an uncertain time of a Covid new normal, the uncertainty that underpins Pollock’s play is powerfully relevant, but we are left to find our answers, which remains slightly unsettling in a professionally staged production with excellent performances from four young actors. Or maybe it is a purposeful ploy to compel us not to judge but to understand.  In a final moment of the play the four girls erupt into an Abigail moment like the girls in Arthur Miller’s The Crucible break into chilling accusatory unison before the court.

I don’t know, but what I do know is the Canberra Youth Theatre production of Normal and the performances of four fine and highly promising  actors will compel me to think and search for answers, which is what a piece of outstanding theatre is meant to do.