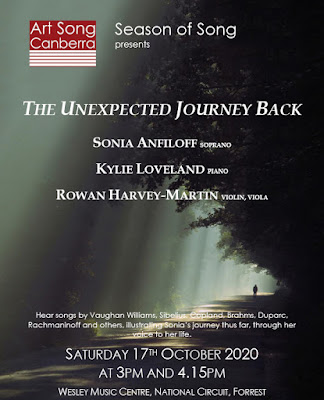 After 9 years in Vienna, soprano Sonia Anfiloff has returned to Canberra.  The choice of songs in her Art Song Canberra concert entitled, ‘The Unexpected Journey Back’, reflected her emotional response to her journey through life so far, the good and the bad.  She presented a wide-ranging and challenging choice of songs by Vaughan Williams, Korngold, Sibelius, Wagner, Copland, Brahms, Duparc, Richard Strauss and Rachmaninoff.

Anfiloff was accompanied by Kylie Loveland on piano and, on certain songs, by Rowan Harvey-Martin on violin and viola.  Both Loveland and Harvey-Martin are very well-known and respected performers here in Canberra and beyond.

The program commenced with ‘Silent Noon’ by Ralph Vaughan Williams.  This beautiful song set the emotional tone for the concert and it was sung with great delicacy and feeling by Anfiloff.  She was able to demonstrate both the power of her rich soprano voice as well as her ability to judge the right level of emotion that this song needs to be a very moving experience for an audience.

As the program continued it became clear how carefully the songs had been chosen to display Anfiloff’s voice and her ability to sing them with accuracy and feeling.

The dramatic passages of ‘Was it a dream?’ by Jean Sibelius were very well sung and the piano accompaniment by Kylie Loveland was superb.  Wagner’s ‘In The Hothouse’, was sung with great introspection and two works by Brahms were emotionally very effective.  The viola playing by Rowan Harvey-Martin was especially notable in the first Brahms song, ‘Assuaged Longing’.

The final three songs of the concert by Henri Duparc, Richard Strauss and Sergei Rachmaninoff were the highlights of the concert.  All very different works, they gave Sonia Anfiloff the opportunity to show her full range of skill and artistry.  ‘In The Glow Of Evening’ by Strauss was especially memorable. ‘Spring Waters’ by Rachmaninoff provided a welcome note of optimism and was sung with great spirit.

For an encore, Anfiloff sang Henry Mancini’s ‘Crazy World’ from the 1982 movie, ‘Victor Victoria’.  The emotion of this contemporary song fitted perfectly with the program of songs she had just presented, bringing this fine concert to a satisfying close.