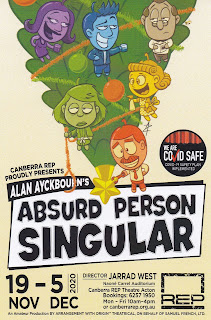 Cast, in order of appearance:

There was plenty of sanitiser on hand in the foyer to help protect us from the current physical virus.  Canberra REP on stage sanitised us with hope against the absurdity of human behaviour in a tightly-focussed, expertly performed production of this British writer’s most significant play.

The Arts and Entertainment are often blithely dropped together into a bland ‘Industry’ box on a bureaucratic office floor.  But entertainment without art is just another form of virus.  Art is the vaccine we need.  Better than mere surface sanitising, theatre art injects sanity into our veins.  Canberra REP emphasises that this is an amateur production, but their artistry – through casting, directing, and design – makes Absurd Person Singular into Entertainment +.  It’s a great pity that the reality of the physical virus restricts the number who can see the play.

Each actor establishes the central through-line of their character, so that they appear to be real; yet each brilliantly uses the techniques of farce which makes each of the three Christmases so disastrous and horribly funny.  Scene 1 in the Hobcroft kitchen sets us up for the comedy; Scene 2 in the Jackson flat pushes absurdity to the edge of a black abyss; then in the Brewster-Wrights’ completely dysfunctional household, Scene 3 turns into an awful satire in singing the carol’s words My True Love Gave To Me (The Twelve Days of Christmas).

Ayckbourn has made the three men’s characters relatively less demanding to act, since they represent, each in their own way, men who are incapable of insight and personal development.  Arran McKenna’s Sidney is essentially dictatorial in personal and social situations, even when it’s the fun of Christmas games that he’s imposing on others.  Chris Baldock captures a kind of ennui in Ronald, even when he seems to open up a little to Geoffrey before the final scene becomes disastrous.  Cole Hilder has the most complex part to play – and does it very well, particularly in Geoffrey’s frustration with his wife’s complete switch-off in Scene 2.

The women’s characters, in contrast, each develop in ways which I see as comments on the complexity of life that women face.  Amy Dunham’s Jane begins seemingly as a caricature of the standard perfectionist housewife, but as she has to deal with that impossibility when she becomes trapped outside in England’s incessant rain, and sees that cleaning Eva’s oven is not the answer in Scene 2, by the third Christmas she has learnt to come to terms with playing the game alongside Sidney even though she loses her own identity in doing so.

Tracy Noble reveals in Scene 1 that her Marion half-knows that putting on her airs is a kind of protective sham.  In Scene 2 she sees where Eva is going into the depths.  By her third Christmas, alcohol is her only defence – her only way of giving herself identity, even as it is self-destructive.  The change is awful to watch.

In presenting Eva, Steph Roberts has perhaps the greatest work to do.  In Scene 1 she is strong but frustrated by her husband’s ineptitude.  A year later she is almost catatonic and is only saved from suicide by chance.  But the experience shows her that she has the right to be herself on her own terms, and she sings in some degree of hope in the end for where she might go (though not necessarily with Geoffrey, I suspect).

The measure of an artful entertainment, in the case of an absurdist satirical farce, is that the characters remain memorable in their own right, and we are left with hope for humanity, despite laughing so much at such ordinary kinds of behaviours.

That is success for the whole production team, and a gong for our long-standing local repertory theatre in Canberra, where, as Jarrad West reports, “I have loved this play since I was a little boy, when my mother performed as Jane in the mid 90’s.  To be able to now bring it to life on the REP stage again some 30 years later is one of the bright spots of this year.”  Community life is something to be enjoyed and valued, and at the risk of showing bias, I can report that a bright spot for me is to see on stage the daughter of the students I taught back in 1976-77, Amy Dunham, now described as “a seasoned Canberran performer for the last 23 years, with multiple leads across a wide range of plays and musicals”.

Alan Ayckbourn intended his play to be more broadly political – about property development and speculation that was rife at that time, the 1970s, in the UK – as well as about marriage relationships.  Today, we are in the midst of an absurdist election count in the United States, arguments over lockdown to save lives against opening up the economy and being “Covid normal”, and reports all over the news in Australia of our “Day of Shame” war crimes inquiry (‘Rules were broken.  Stories concocted.  Lies told.  Prisoners killed’ in Afghanistan), with a comment that “When General [Angus] Campbell says that members of special forces did extraordinary work in Afghanistan he’s not trying to sanitise the ADF of what happened”.  (Harley Dennett, The Canberra Times, Friday November 20, 2020 Page 8).

Being able to go to the theatre, at last, even with Covid limitations, and know that our arts organisations can still put on such shows as Canberra REP’s Absurd Person Singular is not only entertaining but is a comfort and represents hope for the future.