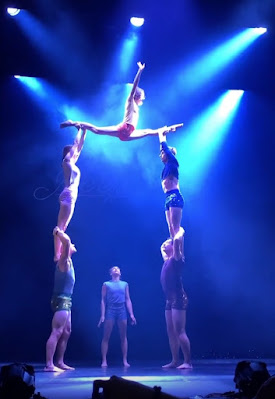 Circa’s “Peepshow” elicited a sense of voyeurism from the audience - one explanation for the title of the production, given that “Peepshow” was really rather tame on that front, bar one or two exceptions. Untamed hair, subtle make-up and costumes with minimal fuss gave a somewhat private element to what we were watching. This did not detract from the production though. “Peepshow” was a captivating, continual display of strength, balance, bravery, trust and skill.

The men were muscular and solid, Luke Thomas was particularly athletic. At times, the men had two or more people standing on their shoulders or head, yet at other times, the females carried and lifted the men and each other, and used their weight to find balance and counter-balance in a myriad of positions and combinations. And these were petite, slim girls too.

The impressive balancing acts and human towers were executed throughout the show, with the girls going into splits between two towers, or leaning forwards before tumbling into forward rolls, eliciting gasps from the audience, who were clearly impressed and lapping up the first half.

The females offered a confidently-performed, static trapeze routine where no body part was off-limits to hang from. Then a frenetic silks dance - with a novel, interesting, but slightly laboured beginning, followed by rolling, tumbling and changing directions in the blink of an eye.

The cabaret number, involving red gloves and a lot of hands and arms and “support” for the topless performer, involved an “audience” member, who set the bar rather high for participation to the surprise of some and knowing chuckles of others.

The first half, in particular, had a very enjoyable soundtrack. Covers of “I’ll Be Your Mirror” and a melancholy “Sweet Dreams (Are Made Of This)” really complimented the acts and added to the appeal of the ambience.

The lighting didn’t play a noticeable role in the first half, but was intrinsic in the second, in creating an underground club or dive bar, where varying fluorescent letters of ‘Peepshow’ glowed on and off and various combinations of boys and girls engage and entwine.

The second act was somewhat subdued and the twitchy, jerky dance moves that punctuated the performance between tricks, here established each performer’s signature moves - Scott Grove hyperventilates until the definition of ribs, abs, traps, is so impressively pronounced he looks like Popeye. The subtle comedy elements and group acts picked up again to keep the audience engaged. The humour in “Peepshow” hit the right note for this genre - subtle, not sidesplitting.

One can only marvel at the focus, training and courage circus performers display, especially given that shows these days don’t use safety measures other than their fellow performers. In “Peepshow”, the cast spent the majority of the performance on stage in some form or another - an unusual, exhausting and commendable task.

This is not a show for the sweaty palmed, (or footed, or headed) to attempt, but it is a show for those seeking an entertaining and engaging, socially distanced evening to attend. It’s not often one notices wine glasses still half full at interval from people forgetting to take sips!

Posted by Canberra Critics Circle at 3:42 AM