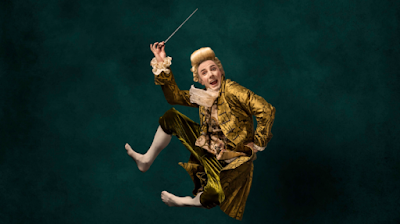 Created and Directed by Yaron Lifschitz and Benjamin Knapton

Performed by Kathryn and Paul O’Keefe and Gareth Chin

Music by Mozart and Quincy Grant

Here’s a little gem of a show that really lives up to its name, magical, musical (Mozart no less), and definitely circus.  Skilfully conceived around the talents of two versatile acrobats, Kathryn and Paul O’Keefe, and a whimsical musician, Gareth Chin, “Wolfgang’s Magical Musical Circus” transports its willing audience into a world where deliciously silly chaos reigns supreme.

The adventure begins when a lonely birthday girl (Kathryn O’Keefe) discovers a recording of classical music on a gramophone. When she starts to play the recording, Mozart himself, (Paul O’Keefe) appears in a puff of smoke riding a bicycle, on which he hares around the stage gleefully demonstrating 101 things to do on a bike. They then follow with a succession of well-worn clown, mime and acrobatic routines, cleverly re-invented and reworked to depict a friendly but competitive relationship between the birthday girl and her imaginary friend.

No words are necessary as both performers are skilful mimes with highly developed acrobatic skills. Whether they’re engaged in a hilarious wrestle over a collapsing music stand, struggling with an unco-operative follow-spot, balancing dangerously on a precarious tower of chairs, engaging in a slow-motion punch-up with an eye-watering climax, or executing an astonishing pas de deux in which the girl balances Mozart on her shoulders while en pointe, they un-erringly engage their young audience and carry them along with the action.

An important component of the show is the music, and to this end, Quincy Grant, utilising recorded music, augmented with the live accordion skills of Gareth Chin, has devised a delightful mash-up of Mozart’s favourite hits to accompany the action.

Given the age-range of the target-audience, it’s doubtful that many of them would be aware of the connection between the brattish, boisterous disrupter on stage and the sublime music accompanying his joyously naughty actions, but this clever show provides a deliciously subversive way of introducing them to his music.

A notable feature of this show is the stylish design consisting of white chairs and tables, two white doors and a white mat set in a black space, with the perimeters outlined in neon, all providing the perfect environment for Geoff Squires to contribute to the magic with his sophisticated lighting design.

Judging from the gales of laughter and continuous gurgles of delight through-out as well as the boisterous cheers at the end, “Wolfgang’s Magical Musical Circus” certainly succeeded in pleasuring its target audience.  Perhaps it might even have inspired a few of them to find out more about that cheeky chappie who inspired the show.