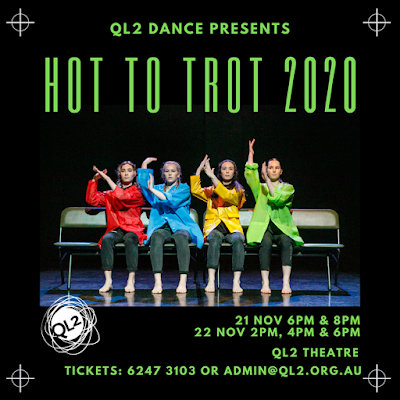 ‘Hot To Trot’ is always worth looking forward to every year at this time.  In spite of the difficulties faced in 2020, it was great to be able to be able to observe the work of the senior Quantum Leapers again as they step into the role of choreographer.  This project is an important starting point in the development of their choreographic journey and their leadership potential.

Once again the imagination and skill of these young artists was on display in a set of dances that were thought-provoking, visually arresting and highly entertaining.  Music to accompany the dances was well-chosen and the lighting designs by Guy Harding gave an important atmospheric dimension to many of the dances.

The program started with two filmed choreographic works.  ‘Flowering’, choreographed and filmed by Natsuko Yonezawa, was a visually stunning and colourful look at dancers as if they were flowers, growing and blooming.  It was a nicely thought out concept that worked very well.  ‘Stairs’, choreographed and filmed by Magnus Meagher, involved three dancers with the straight lines of stairs used as a contrast to the swirling motion of the dancers to produce an atmospheric work of abstract beauty.

‘Similar, Same But Different’ was a conceptually clever dance that contrasted similarities as well as the differences between two people – the choreographer and his brother.  It was choreographed and danced with notable skill by Danny Riley and proved to be one of the highlights of the program.

Alyse and Mia Canton were next with ‘Programmed Pulse’ in which four dancers demonstrated the necessity to break out of the routines in our daily lives.  The repeating patterns and the precise co-ordination between the dancers was a feature that made this a very satisfying and appealing work.

The next item, ‘Faking It Till You Make It’, was a witty and mature work choreographed and danced by Courtney Tha.  This audience-pleasing dance was another of the show’s highlights.  Quirky, imaginative and great fun with its clever concept, it was both visually pleasing as well as thought-provoking.

Lillian Cook’s ‘Describe The Shape Of T At The Beginning Of The’ focussed on learning and observation.  This dreamlike, almost surreal work had a strong visual impact and was performed very well by the four dancers.

Pippi Keogh then gave us’ [re]STRICT’ which explored the relationship between freedom and control.  Featuring precise patterns of dance by four dancers, it was strong and clear conceptually and beautiful to watch.

‘I Knew You’d Come Back To Me’ focussed on the highs and lows of being involved in a love triangle.  Choreographed by Hollie Knowles, the pleasure and pain of relationships was skilfully conceptualized and performed very well by the three dancers.

Rory Warne’s ‘Face On’ gave us a ritualistic, almost mechanical concept in his dance about a world preoccupied with aesthetics.  The precise, intricate ideas behind this story were cleverly realized in dance terms and skilfully performed by his three dancers.

The final work, ‘Circle: Complete’ was choreographed by Sarah Long.  Following four people in their own individual exploration of the Hero’s Journey, it was a clever comment on popular media’s worship of heroes.  It was danced with great flair by the four dancers.  The costumes added a colourful extra dimension to this work.

Once again this year, these young choreographers demonstrated strong imagination and skill in developing and producing the dances presented.  All of the works were of a consistently high standard in terms of concept and execution.  The choreographers were supported by the enthusiastic and fine dancing by the performers in each item.

Posted by Canberra Critics Circle at 10:40 AM