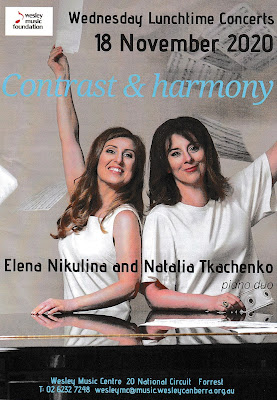 It might have been only a short fifty minute concert, but the range of works presented and the superb piano playing by the talented duo of Elena Nikulina and Natalia Tkachenko were hugely enjoyable.

Elena Nikulina graduated with a Master’s Degree in 1999 from the Donetsk State Conservatoire, Ukraine.  She has performed extensively in Europe and the Middle East.  Since arriving in Australia in 2006, she has continued as a soloist, four-hand pianist and accompanist as well as being acknowledged as a high level piano teacher.

The duo presented a four-handed concert on piano of five contrasting works by composers from the 18th century up to the present day.

The concert commenced with ‘Concertino On Two Russian Themes’ by Alexander Rosenblatt.  It proved to be the perfect opening to a concert with recognizable Russian tunes arranged in various styles.  It was played with great energy but also a sense of fun.  At one point, while both artists were playing at a furious speed, Nikulina had to stand to be able to reach across Tkachenko to get to the keys she needed to play.  It was thrilling to watch and the sound produced was superb.

‘Ballet’ from 'Orpheus and Euridyce' by Christoph von Gluck was a nice contrast to the fireworks of the first work.  A hauntingly beautiful, introspective piece, it was played by the duo with great sensitivity.

This was followed by Astor Piazzola’s ‘Libertango’, a well-known work that was presented full of passion and drama.  Rachmaninoff’s ‘Vocalise’ was next and the duo gave it the rich emotional and romantic sound it requires.  The quiet, reflective final section was especially memorable.

The final work on the program was ‘Christmas Celebration’ by Jonathan Scott.  It was nicely melodic with recognizable Christmas songs such as ‘Jingle Bells’ and ‘We Wish You A Merry Christmas’, a perfect and upbeat ending to a great concert by these excellent performers.

At the end of the concert, the capacity audience gave these fine performers a sustained round of applause which they richly deserved.

Posted by Canberra Critics Circle at 7:38 AM