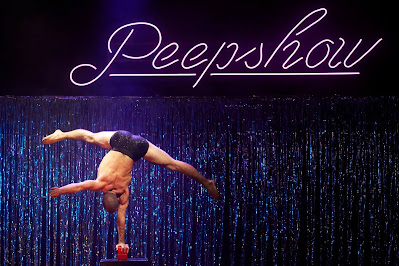 Circa never fails to impress with the skills of its artists, and the ingenuity of its presentations. “Peepshow” is no exception.

“Peepshow” is presented in two acts, the first of which is light-hearted and cheeky, performed to an engaging techno soundtrack, with the performers smartly costumed in uni-sex, ruffled-collared white shirts and glittery black trunks.  A simple sophisticated setting of a silver fringe curtain allowed the performers to appear and disappear when not required on stage to perform some gravity- defying stunt or support a colleague in another. Above the curtain, a neon sign spelt out the name of the show.

The performers introduced themselves in a tightly choreographed mirror-imaging routine.  As with previous Circa presentations, “Peepshow” is proudly ensemble, with the performers physically supporting each other, regardless of sex,  as required by the complicated acrobatics which often elicited audible gasps from the audience. 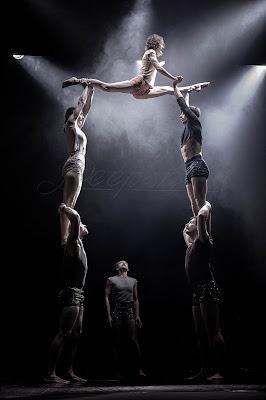 A couple of beefy blokes did the heavy lifting for routines in which colleagues balanced on their shoulders  to  perform seemingly impossible contortions and balances.   Elsewhere the ladies flaunted their femininity in cute, clever routines involving lots of red gloves and a confusion of body parts.

Among the tightly choreographed ensemble routines there was space for each performer to show off specialities, among them an eye-watering trapeze routine in which a performer hung by her heels, chin, and neck.

The mood changed for the second half of the show. The music, the lighting and some of the acts, became darker, even menacing at times. However the skill level was no less enthralling with each performer pushing their body to such seemingly impossible limits that the audience was kept on tenterhooks as to what that limit might be.

Despite its cheeky title, and the brevity of some of its costumes, “Peepshow” is a cleverly conceived and brilliantly executed show which is unlikely to raise an eyebrow of anyone interested in experiencing imaginatively-packaged, world-class acrobatics.

This review first published in CITY NEWS on 5.11.20