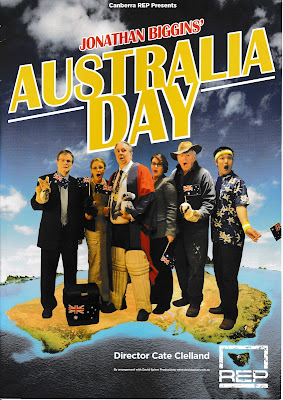 ‘He’s a xenophobic fascist but, apart from that, he’s OK’, explains one of the characters in ‘Australia Day’.  Jonathan Biggins’ ability to home in on the cringe-worthy aspects of Aussie characters and society is strongly displayed in his very funny first play, ‘Australia Day’.

First performed in 2012, Biggins based his play on his experiences as an Australia Day Ambassador in country Australia, and particularly on his encounters with organising committees.

Set in the fictitious country town of Coriole on the northern coast of New South Wales, we observe the local organising committee making plans in the Scout Hall for their next Australia Day.  Then, on Australia Day, the committee members have to deal with the things they didn’t plan for - a thunderstorm, food poisoning and broken toilets – as well as a host of other problems.

Cate Clelland has gathered a set of actors who have the right look for the colourful characters they portray and they handle the comic aspects of the script very well, too.

Pat Gallagher plays the mayor of Coriole who is working towards a seat in federal politics.  He gives a convincing performance as this political animal who just manages to stay one step ahead of disaster.  As Robert, the less politically astute committee member who just wants to do the right thing, Thomas McCoy plays his frustrated character very well.

Sarah Hull does a fine job as Helen, the local Greens member who is annoyingly idealistic until she shows her true colours and Neil McLeod gives a very amusing performance as the elderly, intolerant Wally, who is struggling with political correctness.

Jonathan Lee is very funny as Chester, an Australian-born Vietnamese school teacher who is more ocker than anyone else and Micki Beckett is infuriating but adorable as the Country Women’s Association member who can’t see why anything has to change.

Cate Clelland’s nicely designed production moves at a good pace, capturing the funny aspects of the play very well.  A couple of serious moments in the play seemed a bit contrived and less effective, but it’s the comedy we’re looking for here and the show certainly delivers on that.

For anyone who’s ever served on committees, ‘Australia Day’ will remind you why you never want to do that again.  Go along and see yourself in these all too real characters.

Len Power’s reviews are also broadcast on Artsound FM 92.7’s new ‘On Stage’ program on Mondays from 3.30pm and on ‘Artcetera’ from 9.00am on Saturdays.
Posted by Canberra Critics Circle at 9:33 AM