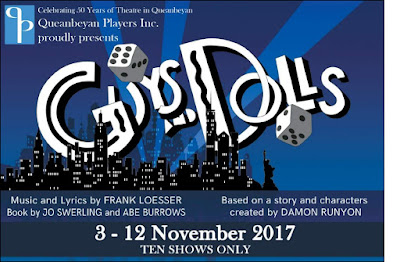 One of the enduring, classic musical comedies, ‘Guys and Dolls’ first opened on Broadway in 1950 and remains popular to this day.  It’s set in the late 1940s and is based mainly on two Damon Runyon short stories about gangsters, gamblers and other characters of the New York underworld around Broadway.

The unique dialect that Damon Runyon used in his stories for his colourful characters – a mix of highly formal language and slang – is an important aspect of this musical.  Tina Robinson as nightclub performer, Miss Adelaide, gets it right with her very funny and appealing performance.  Anthony Swadling does well as the colourful Nathan Detroit and Chris Bennie displays strong comic timing as Chicago gangster, Big Jule.  The rest of the cast playing the underworld characters are uneven in their ability to master the dialect resulting in many lost laughs.

There are also strong acting performances from Kitty McGarry as Salvation Army Sergeant Sarah Brown and Rob Grice in the sentimental role of her father, Arvide Abernathy.  Especially notable in the Cuba nightclub scene was chorus member, Kara Sellars, who gave a very funny performance as a latin dancer with attitude.

The singing is generally very good with strong work from the chorus who manage the harmonies well, especially in ‘Sit Down You’re Rocking The Boat’, led by Ben Wilson, in fine voice as Nicely-Nicely Johnson and ‘Luck Be A Lady’, led by Steve Galenic.  Some of the leading players had difficulty singing their top notes.  Musical direction by Jenna Hinton produced a fine sound from the orchestra with good sound balances between performers and cast.

The lighting was a bit hit and miss with performers working often in shadow.  Some lighting cues were late on opening night.  Performers wearing hats need to be more aware that the hat brims are inclined to shadow their faces.  Set design by Thompson Quan-Wing was simple and practical.  The scene changes often took too long.

Choreography by Belinda Hassall was fine for most of the numbers, especially ‘Take Back Your Mink’ and the Cuban nightclub dance but was less successful for the Crapshooters Dance where there was no clearly defined theme for this lengthy dance number.  Jennie Norberry’s costumes were colourful and nicely reflective of the period.

‘Guys And Dolls’ is an audience-pleasing show and this production should win new fans who haven’t seen it before.

Len Power’s reviews are also broadcast on Artsound FM 92.7’s new ‘On Stage’ program on Mondays from 3.30pm and on ‘Artcetera’ from 9.00am on Saturdays.
Posted by Canberra Critics Circle at 12:12 PM