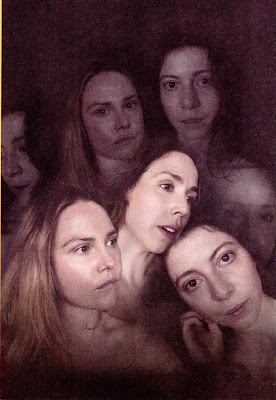 Cast:
The Prozorov family, living in a regional army-base city:

Brandon McClelland and Nikki Shiels play Andrei their brother, about 25 in Act 1, now owner of their large house since both parents have died, and his fiancée Natalie Ivanovna, afterwards his wife, known as Natasha

The magnificent performances, especially by the sisters – Alison Bell, Eryn Jean Norvill and Miranda Daughtry – as well as the company all round, were excellent to see, despite an adaptation based on an idea which really does not work very well for this particular Chekhov play, despite recent STC successes with Uncle Vanya and The Present.

The program includes a phone conversation with Andrew Upton “from the UK to discuss the art of adaptation, his love of Chekhov and how Bob Dylan comes into the picture.”  I deliberately do not read such material before watching the show, but by interval I found myself wondering about what time and place I was supposed be in – because all sort of things just didn’t fit together.

Was this Russia?  All the names were the expected old Russian surnames with the familial nicknames like Masha for Maria, and the usual problem of working out exactly who is related, and how, when patronyms and surnames fly about, like Natalie (Natasha) Ivanovna, Aleks Vershinin (whose lover calls him Vershinin), Baron Tusenbach who’s called Nick and Ivan Romanovich Chebutikin, who’s mostly called just Doctor but occasionally Ivan.  The complexities of these intimate and more formal nomenclatures have long been a feature of Russian plays and novels, making translation difficult.  If an adaptation is to work easily in English, the play will need to become a parallel in storyline and character but free of this complexity.

But this Three Sisters still sounded Russian despite it seeming to be set somewhere else in the late 1960s or early 1970s.  Maybe there is a ‘battery’ commander in Wagga Wagga, but in the context of Andy’s household, he’d just be called Alex and his surname probably never mentioned.  Nick might have the nickname, the Baron, but only if he put on airs, rather than actually being one.  The women might well be Olga, Mash, Rene and Tash.  They might all prefer to still be living in Sydney (or even Melbourne), but Chekhov’s sisters surely came from Moscow.

Though the times were a-changin’ when Bob Dylan was a folk singer,  there was nothing like the ennui, that kind of late-19th Century Russian sense of going nowhere for the lower-level upper class.  It was the time of action when we all called ourselves middle-class; and it only took the squattocracy like Malcolm Fraser a short few years to put Whitlam in his place at the foot of the Governor-General’s throne, while keeping some of the best bits of progressive policy, particularly on education (at least for little while).

Even if by the crash of 1987 we might have become cynical like Chebutikin, saying “It makes no difference!  It makes no difference!”, the details of Chekhov’s play are so specific to his culture and time that we would be much better off watching his Three Sisters set in Russia in 1900, and making our own comparisons for ourselves.  Our local Canberra company, Free Rain, did this very successfully in August 2008 (reviewed briefly in The Canberra Times and available at www.frankmckone2.blogspot.com ).

Then the lackadaisical attitude of Chebutikin towards the impending duel in which the Baron is killed, makes sense.  It could have really happened in Chekhov’s day, and symbolised his despair for the future.  It couldn’t have happened in Wagga Wagga in, say, 1972.  But the comparison we could see for ourselves in 1988 brought Chekhov’s point home.  And even then, our Government shoved us through the Great Financial Crisis with concrete action (like building school halls).

We feel that despair again now, with an ineffective government getting nowhere, but this production of this adaptation fails to engage us in our world circumstances as it did for the Russians in theirs, when “the piece proved popular and soon it became established in the company's repertoire” at the Moscow Art Theatre in the period leading up to World War I.  Bob Dylan is just not in today’s picture.

Maybe I’m too cynical about where our theatre is going, but I saw Three Sisters after a weekend of three other Sydney productions – Bell Shakespeare’s The Merchant of Venice, Belvoir’s Atlantis by Lally Katz, and Mary Rachel Brown’s Silent Night at the Eternity Playhouse (Darlinghurst Theatre Company).  (Reviewed here and at www.frankmckone2.blogspot.com November 10, 11 and 12 respectively.)  STC’s Three Sisters was disappointing in comparison.

But the standard of acting and stage design at Sydney Theatre Company is impressive to say the least.  And there’s always the chance you’ll find yourself disagreeing with me about the play adaptation.  If you know the play from previous straight translations (all of which make some adjustments for more modern English-language audiences), it helps.  (I’m quite happy with David Magarshack, Unwin 1969)