Songlines at National Museum of Australia 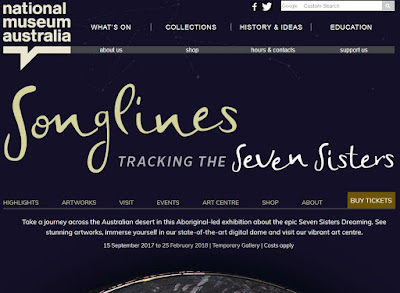 In conventional Anglo terms, Songlines: Tracking the Seven Sisters is an ‘exhibition’.  Yes it is, but in a very special way: a traditional Australian Aboriginal way.  Rather than looking at, we are participating in our culture, which is our experience of living in this land.  All of this land, with all of our people.

Since migrating from England in the 1950s, I have lived in Eastern Australia, where I became a bushwalker, learning to navigate off-track across country using map and compass.  I have travelled through and walked in much of the country west from Alice Springs and Uluru to the coast of Western Australia, with minimum awareness of the traditional understanding of the land.

When I visited the Pilbara town of Roebourne many years ago, between the huge off-shore gas shipping port of Karratha, and Port Hedland, the massive iron ore export facility farther north, I did not know this is where the Songline which tracks the Seven Sisters begins.  I saw then a town owned by people who barred up every door and window, fearful apparently of theft and, I supposed, violence – presumably by those other people, the Aboriginal people who I hardly noticed from my four-wheel-drive.

But there were those seeking change through museum education even then in that place.  The police had moved into a new modern building, while the old police station retained the cells and the history.  Most horrifying to me were the photographs from earlier in the 20th Century of long lines of Aboriginal men, chained at the ankles and chained together at the neck.

Unsurprisingly, Roebourne and many other communities across the country are still struggling with the cultural destruction those photos represent, but as Pastor Marshall Smith said "There's good people around, there's lots of good people. Even those that are in chaos, they are good people....They are caught in something they cannot get out of, and they need other people to help them to see that."

Reporter Nicolas Perpitch observed in August this year “...there is a push to teach young people about their culture through dance programs, painting centres, and cultural tourism, to promote a sense of belonging and identity that has been lost to many.” [ http://www.abc.net.au/news/2017-08-29/roebourne-the-heart-in-the-darkness/8842220 ]

Going through the exhibition is more like exploring an art installation, even better like being an audience member in participatory theatre.  Individual elders in full-size videos personally welcome you into each part of the journey from Roebourne to Docker River – but only when I heard Margo Neale and Alison Page explain the process (which will be broadcast on Radio National in January) did I fully understand that aunties and elders, with young leaders like Curtis Taylor, from the West Coast to the Red Centre took up that challenge of teaching their young people by initiating the presentation of the Australia wide story of the Seven Sisters at the National Museum of Australia to take their teaching to all young people -–and even to old people like me who still need the lesson.

The National Museum, from its inception by its original Indigenous Director, Dawn Casey, was planned to be a proactive collection of Australian cultural artefacts, with an invitation to communities and individuals to offer stories and materials for exhibits.

For me it was a great experience, for example, to interview Seaman Dan from the Torres Strait Islands at the Paipa Exhibition (available on my blog at www.frankmckone2.blogspot.com ) for The Canberra Times, July 19, 2002.  And it was a salutory lesson to hear direct from the pearlshell diver’s mouth of “off Darnley, more than 30 fathoms down, where an unknown number of young men have been caught in the reef, in their bulbous divers’ suits, while their supply boats, pushed by tides and winds, shifted beyond the reach of safety lines and air hoses”.

Then Casey, the NMA Director, employed an Islander, Leilani Bin-Juda, to curate the exhibit – in itself a highly original management move (and controversial as political power in the shape of PM John Howard placed ‘black-armband’ historians on the NMA Board and Dawn Casey’s contract was not renewed after a powerfully successful first four years).  Her legacy, like her culture, has survived despite everything ranged against it, and we see the Songlines exhibition not only initiated but entirely planned, and the process of preparing materials from artworks to movies carried out and managed in a cooperative venture by Senior Custodians of Martu country and Anangu Pitjantjatjara Yankunytjatjara (APY) and Ngaanyatjarra lands of Australia’s Central and Western Deserts.

The role of the Museum has been to assist the elders in the creation of their project.  I see this way as a model for self-determination, not only for this magnificent work in social education, but for governance across Australia in all our communities.  Government should be about assisting people to create culture from the land up, rather than predetermining what top-down central power decides should happen.  In a democracy, and even more so in a multicultural society, the principle demonstrated by the Martu and Anangu people in the creation of Songlines: Tracking the Seven Sisters is essential to the growth and health of the whole Australian society.