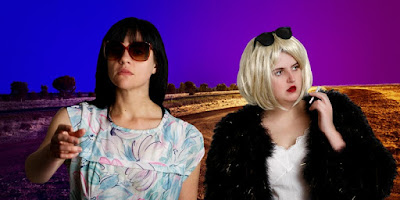 Ralph Wilson would have approved of Bridget Mackey’s  Love/Chamberlain.  He forged a tradition of presenting challenging works. At the time they were unknown works by great writers such as Samuel Beckett, Henrik Ibsen and Anton Chekov. In the theatre at Gorman House Arts Centre, named after the late Ralph Wilson, Centre director, Joseph Falcone and his team have initiated the Ralph Indie program “to support artists to develop and present new performance works.”
Bridget Mackey’s Love/Chamberlain is an ideal choice, not because it is a fully formed, expertly performed and sophisticated drama, but because it is experimental in the innovative sense of the word, giving birth to an original and challenging idea and with the aid of director, Cathy Hunt, dramaturg, Rochelle Whyte and performers barb Barnett as the Oracle/Psychic, Emma McManus as Courtney Love and Heidi Silbermann as Lindy Chamberlain bringing it to life in an intimate and non-intimidating space.


Emma Lockhart –Wilson’s set design reveals a stretch of the Hume Highway, lined with shredded paper, the detritus of fears and torn dreams. In a fortune teller’s booth at the rear of the stage, Barnett offers her sagacities while tearing off the dates to announce the imaginary meetings of Lindy Chamberlain and Courtney Love through the years. A sign at the front of the booth exposes the futility of unfounded hope “Whatever you are looking for, you will not find it here.” It is vain hope to look to the psychics that Love visited after Kurt Cobain’s suicide or the answers that Lindy hopes for. Both women are tormented by guilt, one the grieving mother, the other the grieving widow, taunted by the oracle in various guises.


The meetings, - Mackey’s fanciful invention – flash back and forth from the highway in 1979 to a school in 1982 to 1994, the year of Cobain's death and back again. The narrative device announces the years with clarity, but it is difficult to unravel the connections between the unfolding years, other than to trace the building dilemma, the mounting guilt or the despairing defiance. We are left with two iconic women, searching for answers from an oracle, a roulette wheel , a courtroom, each other, in a song, played out upon a guitar, in the very depths of the womb or in the middle of a deserted highway. Both women struggle to discover the panacea for their pain, but if it is answers that they crave, they are not to be found on a lonely stretch of road. All that they can hope for is a shared comfort “Hug me says the prostrate Love as Chamberlain leans down to know the torment of her grief. And their shared guilt.


Mackey’s world is a hallway of refracting and reflecting mirrors, illusory and distorting, and confronting us with the unreal imagery of three figures in a concocted, unlikely landscape. However, they are neither symbol nore archetype. They are two real and familiar figures, one a rock star; the other a victim, cast by her destiny to play out an unwanted role. I am therefore puzzled that Mackey and Hunt appear to have avoided any real characterization . Maybe this is purposeful, so that we may examine the behaviour and the attitude rather than the reality of their performances. Nonetheless, the absence of an American accent for MacManus and the lack of Lindy Chamberlain’s distinctive Australian twang did tend to detract from my willing suspension of disbelief. McManus plays the appearance and the language of Love, but not the fiery defiance of her concert persona.  The mask is stripped away and we are confronted with the vulnerability of the abandoned woman . Silbermann’ Chamberlain is by iys very nature more credible and Barnett makes the most of her movement skill to embody the tormenter and the tempter.. A longer period of development would have resulted in stronger performances, and a more defined spine to this new work.


Ultimately Love/Chamberlain is an ingenious concept. There is so much to unearth in this seventy five minute play that gives birth to a bevy of complexity about INJUSTICE, grief, anger, society's prejudice, misogyny, motherhood, women, loss and forgiveness.  I hope that Moral Panic will continue to work on this piece and that it will find further development and future seasons of a fully fleshed work.
Posted by Canberra Critics Circle at 10:45 PM