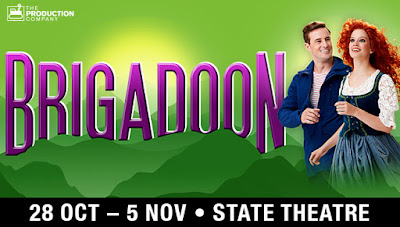 If your only acquaintance with Lerner and Loewe’s charming 1947 musical about two American tourists who accidently wander into a mysterious Scottish town to discover that it only appears once in every 100 years, is through the vapid 1954 film version, which starred Gene Kelly and Cyd Charisse, then Jason Langley’s muscular revival for The Production Company will be a revelation.

Even for those familiar with the stage version, this production bristles with so many innovative ideas that it is sure to inspire a whole new interest in this musical which, unfathomably, seems to have been neglected in recent years.

“Brigadoon” contains one of Lerner and Loewe’s most engaging scores, which here sounds magnificent, played by a large orchestra and beautifully sung by the ensemble, under the direction of Michael Tyack, who, while keeping the show moving along at a brisk tempo, allows the cast space to revel in the romance of the lyrics and melodies.

Honouring the creator’s intentions, Langley has set his production in the present day, so that Tommy Albright (Rohan Browne) and his companion Jeff Douglas (Luke Josling) now use mobile phones to try and negotiate their way out of the Scottish forest before bumbling into Brigadoon. Further contrast is added by Isaac Lummis’s bold Braveheart-inspired costume designs which, unlike other productions, have the men sporting primitive leather kilts, and the women in earthy tones. The tartans being reserved for the wedding scene.

Dozens of floating crosses give an air of mystery to Christina Smith’s flexible setting in which elevated central rostrums, together with clever use of projected imagery and a superb lighting design by Matt Scott, morphs effortlessly into any number of locations, leaving the stage uncluttered for Cameron Mitchell’s exuberant dance routines.

The casting throughout is impeccable. A gorgeous singer, Genevieve Kingsford is quite stunning as the beautiful red-headed, Fiona MacLaren, busily engaged in the preparations for her sister Jean’s wedding to local boy Charlie Dalrymple, when she catches the eye of Tommy Albright.

Rohan Browne is sensational as Tommy Albright. Not only does he sing magnificently, he’s also an unusually gifted actor/dancer, with the ability to phrase both his lyrics and his dancing as extensions of his dialogue. Their scenes together are beautifully managed, especially “Heather on the Hill” and “Almost Like Being in Love”, both of which are pure joy.

It was an inspired idea to cast Nancye Hayes as Mrs Forsythe to tell the story of how Brigadoon became an enchanted town. A genuine living treasure, Hayes, who played Meg Brockie in Hayes Gordon's Menzies Hotel production of “Brigadoon” back in 1966, and after whom The Hayes Theatre in Sydney is named, demonstrated her considerable theatrical flair by making this speech a magic moment, and a reminder of the old adage, “There’s no such thing as a small role”.


Elise McCann as the over-enthusiastic, Meg Brockie, is well teamed with Luke Josling as Tommy’s hard-bitten friend, Jeff Douglas, and her renditions of “The Love of My Life” and My Mother’s Wedding Day” provide two of the highlights.

Stefanie Jones (Jean MacLaren) and Matthew Manahan (Charlie Dalrymple) charm as the young engaged couple in the beautifully staged, “Come To Me, Bend To Me”.

Sally Bourne as Alice Maclaren, the mother of Fiona and Jean, and Stephen Hall as Archie Beaton, the father of the tragic Harry Beaton, both imbue their roles with affecting gravitas, with the well-drilled ensemble impressing with its energy and commitment throughout.

This inspired production of “Brigadoon” is yet another example of The Production Company’s success in rescuing such shows as this from obscurity. It deserves to be seen by a much wider audience than will have the opportunity during its brief season in Melbourne.