WHY DO THEY SHUT ME OUT OF HEAVEN? 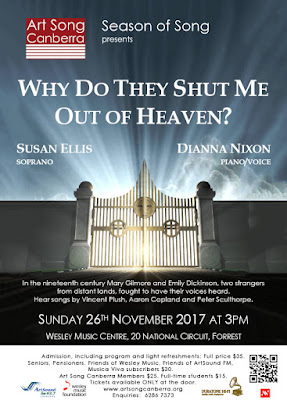 A program with texts by Patrick White, Mary Gilmore and Emily Dickinson might sound like it could be a bit heavy-going, but, combined with the music of Peter Sculthorpe, Vincent Plush and Aaron Copland and the fine singing of Susan Ellis and piano and dialogue accompaniment by Dianna Nixon, the audience was treated to a memorable concert.

‘Patrick White Fragments’, with music by Peter Sculthorpe was first performed in 2009 as part of ‘The Voss Journey’.  It’s a sensuous, delicate short work that was sung by Susan Ellis with great precision.

It was a rare opportunity to hear ‘The Plaint Of Mary Gilmore’ song cycle by Vincent Plush.  A famous Australian now known to most of us only as a portrait on the ten dollar note, Mary Gilmore had a colourful life which the song cycle describes in great detail.  Vincent Plush has produced a major work in which the music is woven around the texts of Gilmore’s letters, describing three distinct periods of her life.

Susan Ellis captured the forthright character of this fascinating woman extremely well in her vocal performance.  Dianna Nixon provided strong piano and dialogue accompaniment and she was joined on piano by Tilda Blackbourn-Rooney for a well-played short sequence requiring four hands.

It was a surprise to discover that the composer, Vincent Plush, was in the audience.  He advised us that he had not heard a performance of his complete song cycle in over 30 years.  It’s a work that should be performed more often.

In the second half of the program, Susan Ellis sang the ‘Twelve Poems of Emily Dickinson’ with music by Aaron Copland.  The unique language of one of America’s greatest poets fit beautifully with Copland’s music giving a sense of the country and its people in the mid-1800s.  Susan Ellis gave a hauntingly sensitive and emotionally honest performance of this work, completing an enjoyable afternoon concert.

Photographs by Peter Hislop
This review was first published in the Canberra City News digital edition of 27 November 2017.