A JOURNEY FROM EAST TO WEST 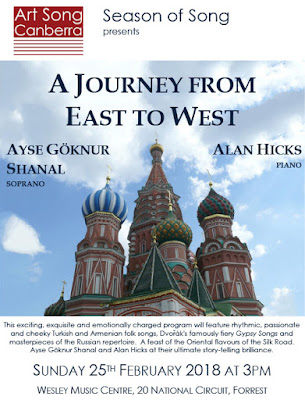 When a concert leaves you feeling excited and energised for hours afterwards, you know it was an exceptionally good one.  That was the feeling following Art Song Canberra’s concert with the delightful and talented soprano Ayse Gӧknur Shanal accompanied superbly by Alan Hicks on piano.

Ayse has won many prestigious awards and scholarships here in Australia and overseas.  She has appeared in principal roles with Opera Australia and Turkish State Opera and has performed with most of the state symphony orchestras in Australia.

The program gave Ayse the opportunity to display the full range of her beautifully clear soprano voice.  It’s a powerful voice and she gave the impression that she still had plenty of power to spare.  It would be great to hear her in a large venue.

The program commenced with a set of Turkish and Armenian Folk Songs.  The songs demand a strong technique to sing them well and Ayse was more than equal to the task.  These folk songs cover a wide range of emotions and were a perfect showcase for the singer.  Alan Hicks accompanied the singer superbly.  It must have been quite a challenge to play these works with their unfamiliar and often complex driving rhythms.

The full program included Gypsy songs by Dvořák and works by three Russian composers.  The Dvořák songs suited her voice and abilities admirably and Ayse was particularly impressive singing ‘What I secretly dream about’ by Rimsky-Korsakov, ‘Wild Nights, Secret Nights’ by Tchaikovsky and ‘Spring Waters’ by Rachmaninov.  She sings the emotional content of these songs so genuinely that she draws you deeply into the music.

As well as being a fine singer, Ayse gave interesting and heart-felt details about the songs and her reasons for singing them.  As well as a having a fine voice, she has a gift for embracing an audience with her down to earth and endearing manner.  This was an excellent first concert for 2018 for Art Song Canberra.

This review was first published in the Canberra City News digital edition of 26 February 2018.

Len Power’s reviews are also broadcast on Artsound FM 92.7’s new ‘On Stage’ program on Mondays from 3.30pm and on ‘Artcetera’ from 9.00am on Saturdays.
Posted by Canberra Critics Circle at 9:42 AM