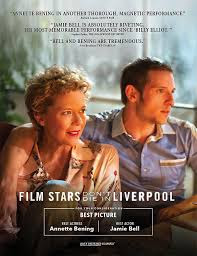 One of the original blonde bombshells of the golden years of Hollywood, Gloria Grahame, played the bad girl until the very end, it seems.  There were four husbands, there were scandals - including the rumour that she had been discovered in bed with a young stepson - and there was a lot of plastic surgery.

So with hindsight it is easy to imagine that her persona in films like The Bad and the Beautiful and The Big Heat, and the real Gloria were one and the same person.

Maybe so. It’s more or less the take that this film has on the screen siren, which is, after all, adapted from a memoir by a young lover, Peter Turner, an aspiring actor. 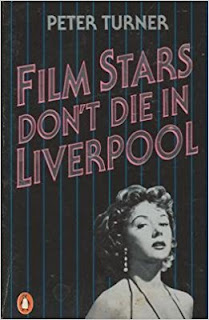 He could only see the good, and stood by her to the end. The film covers the few short years of their time together, their romance told in flashback from the present when Grahame is at work on stage in England, but gravely ill.

The unlikely couple crossed paths at a boarding house in Primrose Hill, London. Gloria, played by the wonderful Annette Bening, invites Peter into her room to help her practice a dance routine.
It is the first time in a long time that Jamie Bell (Billy Elliot) has had an opportunity to show his dance moves, and Bening reveals she is no slouch on the dance floor either. It was the late 1970s, the era of disco and Saturday Night Fever.

It is a tribute to both actors that the romance between these two is so convincing. It is always a pleasure to spend time with Bening on screen, and this new lead role for Bell is a revelation. His ability to portray emotion with tenderness and conviction does, in my view, eclipse her here.

Still, Bening is the perfect choice for the role of the ageing film star who never stopped being the coquette and femme fatale. Just on the cusp of 60 years, she looks great and has a warm and sunny charisma to match. So refreshing to see an ageing female star who isn’t some kind of monster, like Gloria Swanson was in Sunset Boulevard or Bette Davis in What Ever Happened to Baby Jane?

Just before Grahame died at 57 years, from either peritonitis or a relapse of breast cancer, she was a guest at Turner’s family home, a modest terrace house in Liverpool. When she collapsed on stage, her former lover rushed to the rescue and prevailed on the basic decency and kindness of his parents to help him look after her.

The dependable, sparky Julie Walters is lovely as Peter’s mother, a sensible, kind woman who may well have been caring for a woman around the same age as herself. The Turner family’s bemused and down-to-earth attitude to the star is touching.

So, it is for us to wonder where old film stars do go to when they want to drop out of the public eye. The back streets of Liverpool might be as good a choice as any.

There is something to admire about Grahame as she is portrayed here. Her resilience, her upbeat nature, her embrace of risk, flouting convention with her young lover, though it isn’t hard to imagine some of these admirable traits also contributed to her fall from grace.

It is hard to ignore the fact that she was found in bed with her 13-year-old stepson, the son of Nicholas Ray, the director. A decade or so later, the pair did marry, have two children, and it was Grahame’s longest lasting marriage too. The same can be said of Woody Allen, but it doesn’t make the behaviour any more excusable.

Film Stars Don’t Die in Liverpool just glances across the surfaces of Grahame’s personality with its contradictions and vulnerabilities.

Retreating behind dark glasses isn’t enough. There could have been more to this sweet film if it had taken a peak into the dark places of one of the screen’s first ladies of film noir.

Also published at Jane's blog and broadcast on ArtSound FM 92.7
Posted by Canberra Critics Circle at 10:31 AM