With any Simon Stone production it is wise to expect the unexpected. His reinvention of Seneca’s dark and horrible recounting of the myth of brothers Thyestes and Atreus does more than surprise. It astounds, sending shock upon shock to assail our senses and invade our minds. Expectation is shattered in twelve scenes that embody the nature of Seneca’s verse, and reflect the horrendous deeds performed by Atreus but thrust character and action into a modern context. In the tradition of Brechtian alienation, Seneca’s plot is displayed on a screen at the start of each scene. As each atrocity unfolds, we sit in judgement, reeling at the horror, but witnessing with bizarre fascination the grotesque perversity of Atreus’s deeds.

The initial shock occurs when the sliding panels rise on either side of the narrow stage to reveal, not only the audience on the other side of the central stage, but three men dressed in contemporary clothes. One sits against a wall. Another stands with a glass of red in his hand and a third stands, also with a glass of red, and recounts his experiences with a former girlfriend. The dialogue is distinctly the idiom of the present day Australian. It is the matey language of the Aussie male, straightforward, funny, crude and blokey. 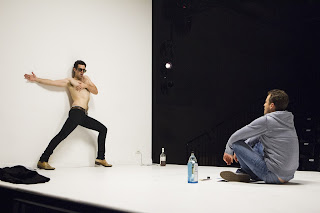 Gradually the humour darkens as one of the men becomes more belligerent and a menace seeps into the conversation. And realization dawns. Toby Schmitz’s aggressive reaction reflects the psychopathic irrationality of the younger twin, Atreus. Thyestes (Thomas Henning) stands silent, waiting for the moment as half-brother Chrysippus (Chris Ryan) prattles on. Atreus and Thyestes draw their murder weapons as Chrysippus lies listening to Roy Orbison, and the panels fall. The laughter has now subsided, as the ensuing scenes play out the preludes to bestial acts. Schmitz and Henning personify the characters of Atreus and Thyestes, while Ryan assumes the other characters of Seneca’s verse.
From Scene 2, we are drawn into the plot of Seneca’s poetic retelling of Euripides’ original tragedy. Stone’s direction is electrifying, spontaneous and brilliantly intelligent. Confronting and shocking, scene after scene depicts the underbelly of the human psyche. Domestic and sexual violence display the deep caverns of human darkness, depravity, and evil. Scene by scene a new horror is revealed until, with a stroke of insightful brilliance, Stone leaps past interim scenes to the final act of revenge, before returning to the events that led to Atreus’s death and the ultimate act of justice before the Gods. The drama comes to a shocking end with Atreus’s celebratory feast on the occasion of Thyestes’ return from banishment at which he feeds Thyestes’ butchered and dismembered sons to his brother as a final act of revenge for his brother’s vile rape of his wife. It is a gruesome, maddening act of vengeance that drives Thyestes insane.
A political tale, conceived in Greece, reinvented in Rome and told in a contemporary context by members of the Hayloft Project Belvoir has become a psychological parable of towering universal significance.  Audiences are challenged to judge the actions and consequences of human behavior, irrespective of era, place, belief or culture. 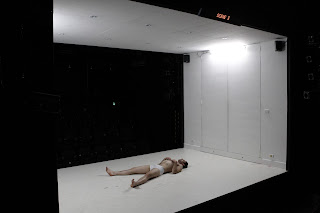 In Henning, Ryan and Schmitz, Stone has actors who instinctively understand his essential vision and have shared in its conception and creation. They construct a riveting reality. For ninety minutes, we sit transfixed, horrified and yet fascinated by ambition, jealousy, cruelty, bestiality, sexual deviance and the nature of evil. Each actor performs flawless characterization, as representation of the nature of each character. It is Toby Schmitz in the role of Atreus, who magnificently transports us into every uncomfortable moment of the drama. From his very opening line, crouched against a wall, he arouses our enquiry, and excites our fascination for his bizarre behavior. Mercurial, megolamaniacal and the psychopathic embodiment of evil incarnate, Schmitz wheedles his way into our psyche until we too cry out for catharsis in the face of such horror, depravity and despair.
Stone’s revival of Thyestes is a jewel in the crown of this Adelaide Festival amongst a host of gems. In the final centenary remembrance of the Great War, it is probably not surprising that art should reflect so powerfully on man’s inhumanity to man. Brilliant in its concept, design and execution, Thyestes, along with other productions, sharing similar themes at this year’s festival, cries out its universal warning to the future. It is art at its most powerful, its most magnificent and its most necessary.
Posted by Canberra Critics Circle at 10:27 AM