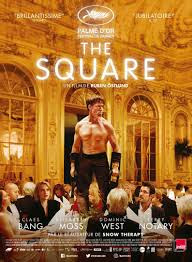 As he is portrayed by the Danish actor, Claes Bang, Christian is assured, sensitive and genial. He is the head curator at a contemporary art museum in Stockholm, with the jaunty name X-Royal Museum, and he is also a caring father to the two little daughters he sees on time-share and is an engaged global citizen who drives a Tesla.

Not the kind of man likely to land himself in deep trouble.

One day out and about in the city on foot, however, he is drawn into helping a young woman screaming for help. A cry for ‘help’ is one of the film’s central motifs. It is scattered throughout in different situations, some of which would work extremely well in a thriller by Hitchcock. The upshot is that he is pickpocketed during this incident and comes away from his charitable act minus mobile phone and wallet.

With location finder activated, he and his assistant at work, Michael (Christopher Laesso, another Danish actor in this European coproduction), hatch a devious plan to prompt the thief to return the stolen goods. The phone signal is blinking from an inner city high-rise that looks like social housing. The pair drive to the apartment block with leaflets to post in every letterbox, but it's the kind of place Christian would never enter, and some very funny scenes ensue.

Miraculously, the plan works and the goods are returned, in a drop off at the local 7 Eleven. It puts Christian in even closer touch with one of numerous people begging on the street. But leafleting an entire apartment block of tenants with the threat of public exposure, draws ire from an unexpected quarter.

Work is giving him grief, too. The museum's latest acquisition is ‘The Square’, an installation created from cobblestones dug up from the museum courtyard and self-consciously re-laid within a 4 x 4 metre LED square, a designated ‘sanctuary of trust and caring’. The millennial marketing team hired to help launch this bland artwork have an arsenal of shocking ideas that Christian has to keep pouring cold water on, until one of these concepts escapes unapproved while he is distracted, and it goes viral.

American actress du jour, Elisabeth Moss (Top of the Lake, The Handmaid’s Tale and more), has a small but pithy role in The Square as a journalist. The naïveté she suggests at the start in a sharp, amusing interview asking Christian to explain – better still, to decipher - the jargon in museum marketing material, quickly falls away to reveal an astute and practised player. Why she keeps a pet chimpanzee in her apartment is still a mystery to me, but I take it as a given.

Poor Christian. He has so much going for him it is quite impossible to feel sorry for him. What brings him a world of trouble has more to do with his gender, class and ethnicity than with faults of his own.

In this sharp and savvy social satire from writer-director Ruben Östlund, Christian’s peaceful, refined and ordered world descends into chaos, for minor errors of judgement, none of them hanging offences. The downwards spiral is replete with telling scenes of embarrassment but the tone is almost always light and the treatment kept brisk.

If anything, there are too many strands for drawing it all together and there is a bit of slump at the end.

It is a mark of Ostlund’s considerable skill, however, that the tense scenes in The Square would work equally well in a thriller, including a  quite terrifying scene of performance art that runs amok at a sedate dinner.

The Square has many attributes. Witty, smart, original, and delivered with airy panache - just for starters.