THANK Q FOR THE MEMORIES 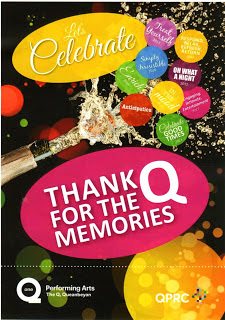 It was an enjoyable trip down memory lane at the Q Theatre, Queanbeyan with ‘Thank Q For The Memories’.  Devised by long-term and much-loved local performers, John Shortis and Moya Simpson, the program cherry-picked some of the memorable moments from the many excellent shows that have played at the Q in its first ten years since it opened in 2008.

The show started with one of those never to be forgotten moments in theatre from over ten years ago - the surround sound ‘Nun’s Chorus’ from Queanbeyan Players’ ‘The Sound of Music’.  This was followed with a catchy new title song for the show, ‘Thank Q For The Memories’ written especially for the occasion with Shortis and Simpson and the very tuneful Worldly Goods Choir.

John Shortis came up with some amusing old Canberra and Queanbeyan songs from an earlier, more innocent era and throughout the evening there were fascinating historical anecdotes about Queanbeyan theatre and the area in general.  Moya Simpson presented a very funny ‘Sheep Dip Blues’ and there were enjoyable performances of some of Shortis and Simpson’s own memorable political songs.

A dazzling array of local talent who have played at the Q in the past ten years was presented as the evening progressed.  Many are still performing in theatre regularly around town like Jordan Best, Amy Dunham, Jenna Roberts, Liz Bradley and Gordon Nicholson and it was good to see the return of Peter J. Casey, Christine Forbes and Dave Evans to the theatre’s stage.  We were treated to scenes and songs from ‘Fierce Creatures’, ‘Buddy: The Buddy Holly Musical’, ‘The Addams Family’, ‘I Love You, You’re Perfect, Now Change’ and ‘Blood Brothers’ amongst many others.

In a nod to the future, the cast of the upcoming late March production at the Q of ‘42nd Street’ performed a tap number from the show.

John and Moya acknowledged the extraordinary contribution over the past 10 years made by the Q’s Production Manager, Stephen Pike, whose appearance on stage won thunderous and well-earned applause from the audience.

This was a relaxed, delightful evening of nostalgia and great performances by local talent.  I’m looking forward to the next one in 2028!

Len Power’s reviews are also broadcast on Artsound FM 92.7’s ‘On Stage’ program on Mondays from 3.30pm and on ‘Artcetera’ from 9.00am on Saturdays.
Posted by Canberra Critics Circle at 10:46 AM