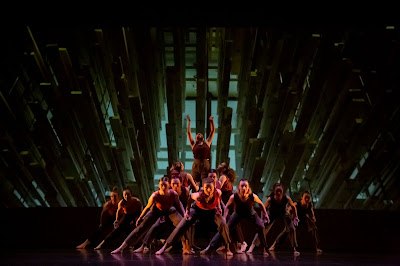 Over the years, QL2 Dance, under the guidance of Artistic Director, Ruth Osborne, has become a leader in youth dance with its unique focus on developing dance-makers rather than dancers. Each year dancers from all over Australia, and indeed internationally, audition for the opportunity to work with professional choreographers in the annual showcase.

Although one focus of this annual event is the opportunity and challenge it offers for emerging choreographers to create on larger casts than would be commercially possible, it also offers the dancers the experience of extending their skills and horizons by providing a theme each year.  This year the theme was space and architecture.

The printed program for “Filling the Space” contains an impressive list of QL2 dancers and choreographers who have gone on to establish professional careers around Australia and Internationally. This year’s choreographers are all QL2 Alumni. Both Eliza Sanders and James Batchelor work internationally. Sanders divides her time between New Zealand and Australia working as a choreographer/teacher/ dancer. James Batchelor is currently attracting attention in Europe for his unique choreographic voice, while Ruth Osborne has built an international reputation for her pioneering work in youth dance.

With “Proscenium”, the first of three ensemble pieces which made up the program, James Batchelor demonstrates why he is in such demand, continuing his exploration of space and architecture by making the stage space itself the focus of attention.

The work commenced in silence, with the front curtain rising to reveal two dancers standing motionless at two ballet barres. One by one, other dancers joined them, before the background curtain rose slowly, to reveal yet more dancers positioned at barres. Then the second background curtain rose to reveal the entire backstage area and more dancers at barres. The effect of the slow reveal of the spaces was stunning. As the music began to seep through, the dancers slowly moved the barres around, before dismantling them and replacing them with rows of chairs.

Batchelor’s works are notable for the slow deliberate pace they establish, which he varies unexpectedly to create striking visuals, challenging his audience to make their own assumptions as to their purpose. “Proscenium” follows this pattern, making huge demands both on its performers and its audience.

The young cast rose to the challenge admirably, maintaining focus and concentration throughout, and the audience was left in no doubt that they had experienced a work of striking originality.

Ruth Osborne was inspired by the grand staircase in the New Acton Nishi Building to create a beautiful work entitled “Naturally Man-Made”.   Each individually costumed in Cate Clelland’s attractive russet-toned slacks and tops, the dancers began by forming a series of   sculptural shapes inspired by the staircase before responding to the beat of the driving soundscape and striking film of them enacting with the staircase in a series of cleverly choreographed sequences.

Eliza Sanders’ joyous work,  “The Shape of Empty Space” utilised clever lighting effects to differentiate spaces on the stage in which the dancers obviously delighted in performing her jaunty moves seemingly inspired by the tall inflated figures often seen in car-yards, to express reactions to the different spaces in which they found themselves.

The work provided a perfect finale for an adventurous program, which ended, as has become something of a tradition, with Ruth Osborne’s delightfully inventive bows which ensure that each of the 28 dancers who make up this year’s ensemble enjoy their moment in the spotlight.