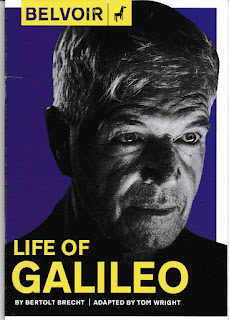 In the John Willett translation of Life of Galileo, there are 51 characters listed plus sundry Senators and men, women and children.

Did I ever dare think that Brecht might be a tad out of date, passé perhaps?  Eamon Flack’s production of Tom Wright’s adaptation of Life of Galileo not only justifies seeing Brecht as arguably the greatest playwright of the last 100 years, but also shows Galileo as the foundation physicist of the last 400 years.

Surprisingly, we find Dr Galileo may not, strictly speaking, have been the original inventor of turning two lenses (a ‘spyglass’) into a ‘telescope’, but without his scientific imagination backed by mathematical calculation we would not have seen Prof Brian Cox showing us all that we now know about the solar system from the stills, videos and even soil samples sent back home to Earth by Explorer 1 (discovered the Van Allen radiation belts, 1958), through Galileo (first Jupiter orbiter, launched 1989), to Cassini (deliberately disposed of via a controlled fall into Saturn's atmosphere on September 15, 2017) overtaken by Voyager 1 which crossed the heliopause (the outer limit of the solar system) in 2012.  [Check it all out at https://en.wikipedia.org/wiki/Timeline_of_artificial_satellites_and_space_probes ]


Brecht, of course, died in 1956, as space rocketry had only just begun.  As a social scientist his crucial point which this production makes so wonderfully clear, is that political power is still in the hands of those who feed people irrational falsehoods – Faith – instead of fairly feeding everyone, which requires the application of true scientific method.

Galileo faced the Papal Inquisition; we still face a Prime Minister elected by a “miracle”!

The theatrical devices that make Life of Galileo work so well are first that Tom Wright’s “task was … to find a way to take a sprawling play written for at least eighteen actors and reduce it to a tighter ensemble”.  With just nine actors centred on Colin Friels as the brilliant ever-enthusiastic inventor, experimenter, teacher and, in the end, wily operator, Dr Galileo of the University of Padua, we see all 15 of Brecht’s scenes played out over 1 hour 50 minutes, no interval.

I’m sure Galileo himself would have appreciated the Okham’s Razor economy and success of what Wright calls his “concentration” of Brecht’s play.

The second highly successful device concentrates the acting space.  Belvoir Theatre has always been a more personal space than the once traditional proscenium arch stage.  One corner of the old factory floor for acting; audience mainly on two fronts looking in.

The Ensemble Theatre in Sydney, set up by Hayes Gordon before Belvoir’s time, has the audience on three sides looking into a more central space (and seeing more easily across to others in the audience).

For Life of Galileo, Eamon Flack sought out Zoë Atkinson to design the space – fully in-the-round.  We are all together in Dr Galileo’s teaching space with him and his students, learning what is wrong with Ptolemy’s theory of the universe.  The orbits of the stars and planets around the Earth just do not make sense.

We are there when potential sponsors look through the new technology – the telescope – and see Jupiter with moons that have never been seen before; and which are orbiting the planet!

We are in the waiting room when the news comes that the Vatican research institute, the Collegium Romanum, has confirmed Galileo’s findings that prove Copernicus was right.

And we are there waiting, too, when the news comes that the Inquisition has placed Copernicus’s teachings on the hated Index, as blasphemy.

We are in there, personally engaged in each of the key moments in Galileo’s life.  And even after his death (he died in 1642 under house arrest in Florence), we are present when his student Andrea smuggles his secret book, the ‘Discoursi’, through the border post on the way to safety in Holland.


And finally we are forever thankful for Galileo’s and Brecht’s faith in human reason, despite all our continuing failures to manage the Earth and our human societies for the better lives we all deserve.  Because we were in-the-round, there when it happened, our applause was a cheer for the future, even as Galileo’s ghost reminds us that the question to be researched is always “Why?”

And we cheer for the extraordinary effort and quality of the writing, the imagination in the design and the skills of the actors which make such powerful and valuable theatre.