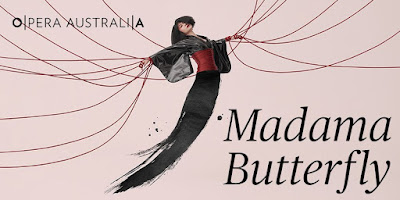 Your response to this production will no doubt depend on how many other productions of “Madama Butterfly” you’ve experienced. If your preference is for a storybook telling of the tragic tale of a woman forced by the betrayal of her lover, the father of her child, to sacrifice her own life to insure her son a better life, as no doubt the composer intended, then Graeme Murphy’s interpretation may take a little getting used to.

On the other hand if, aware of Murphy’s penchant for re-inventing the classics, you’re open to consider some diverting new perspectives on this wonderful old warhorse, then add this production to your “must-see” list.

Murphy’s spectacular new production, while adhering to the familiar storyline, offers plenty of new possibilities for the audience to consider in a spectacular production that places his characters in unfamiliar, if perfectly appropriate, new  surroundings.
In this production the characters use iPhones, they spray rooms with floral perfumes from spray-cans rather than strewing them with flowers. When Butterfly proudly welcomes Sharpless to her house with the words “Welcome to an American house”, it’s left to the audience’s imagination as to how she has redecorated. Indeed the surroundings are initially quite colourless, then unexpectedly ablaze of brilliant colour, thanks to the stunning LED screen visuals of Sean Nieuwenhuis and Michael Scott-Mitchell’s constantly revolving setting which allows whole wedding processions to glide silently around the stage, and for Butterfly’s words to float into the air, then flutter silently to the floor around her at the conclusion of “One Fine Day”.

Having been totally entranced by Murphy’s concept and the performances of the opening night cast, the opportunity to see how Mariana Hong (previously known as Hyseoung Kwon) and Diego Torre, the alternate cast in the roles of Cio-Cio- San and Pinkerton, both having previously performed these roles in Moffatt Oxenbould’s much admired production, would vary their interpretations to accommodate Murphy’s bold new concept, was irresistible.

Between opening night and this second viewing, slight tweaking of the technicals has allowed the production to season beautifully. Apart from the roles of Cio-Cio- San, Pinkerton and Suzuki (Agnes Sarkis at this performance), all the other roles were performed by the same cast as on opening night, all now offering more deeply nuanced performances,  especially Michael Honeyman whose finely honed portrayal of Sharpless has deepened notably.

It’s hard to imagine a more moving interpretation of Cio-Cio-San than that offered by Mariana Hong who appeared to be living the role rather than acting.  Her lustrous singing flowed effortlessly as responses to the varying situations. Coquettish when first meeting Pinkerton, sensuous as they consummated their wedding night, hanging on every word as Sharpless translated Pinkerton’s letter to her, distraught at the realization that Pinkerton had married in America. Her performance is totally enthralling throughout. She also moves gracefully so that the dreamy dance she performs with dancer, Teagan Lowe, appears totally natural. A remarkable achievement given the precarious setting on which it is performed.  Hers is a performance to cherish and was given a rapturous reception at this performance.

Similarly, Diego Torre, who, although not physically ideal for the role, quickly banished any reservations with his stunningly sung, passionately delivered performance for which he was totally invested in the role.  Just watch his responses as Sharpless reads out the conditions of the contract for his marriage-at- first- sight to Cio-Cio-San in the early moments of the opera.

Agnes Sarkis brings warmth to her interpretation of Suzuki, who, in this production, is not nearly as compliant as usually interpreted. She makes Suzuki’s disapproval of Pinkerton and the America he represents, obvious from their very first meeting. Suzuki’s frustration at Cio-Cio-San’s refusal to face the reality, as well as her efforts to protect Cio-Cio-San from the knowledge that Pinkerton is planning to take away their son, knowing the inevitable result, are touchingly depicted.

Nicholas Milton conducting his last performance in this season before handing over the baton to Brian Castles-Onion who will conduct the rest of the season, also earned sustained applause for his masterful interpretation of Puccini’s score which was superbly played and sung by the Opera Australia chorus and Orchestra.

Unfortunately there are no images available of the alternate cast in this production.