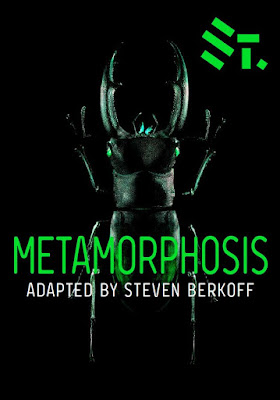 Franz Kafka’s startling 1915 novella about an ordinary man who wakes up one morning to find himself transformed into a giant insect has had scholars debating its meaning ever since.  In Steven Berkoff’s 1969 adaptation for the stage, the opportunity is there for directors to unleash their creativity and produce their own vision of this classic story.

The choice of seating configuration in the Street Two space, as well as the Klezmer-style music, gave a nicely claustrophobic effect to this production right from the beginning.  The director, Adam Broinowski, has set his production in an apartment in a modern deindustrialized landscape spanning the 20th – 21st century.

The detailed work of set and costume designer, Imogen Keen, created an instantly disorienting and effectively drab eastern European atmosphere (with cabbages) which was complemented by Kimmo Vennonen’s clever sound design and an excellent lighting design by Andrew Meadows.  The production fearlessly deals with the messy aspects of having an over-sized insect in the home.

The highly stylised direction had the cast giving very physical performances with well-chosen elements of mime and exaggeration.  It was played with a heightened reality that added to the intensity of the experience.

As Gregor, the man who turns into the insect, Dylan Van Den Berg gave a fine performance, retaining the audience’s sympathy for his plight throughout.  Ruth Pieloor gave a notable reality to the amusing and touching elements of her portrayal of the highly emotional mother.  Christopher Samuel Carroll, with his effective face makeup, was especially strong as the father, showing his distaste and impatience with the situation very clearly.  Stefanie Lekkas as the daughter, Greta, gave a believable performance of a girl who grows into a take-charge confident young woman during the course of the play.

Director, Adam Broinowski, clearly had a vision which he was able to translate effectively to the stage.  Whether viewed as a nightmarish fantasy, a highly significant work full of symbolic meaning or just a bit of fun, this was an entertaining and memorable production.

Len Power’s reviews are also broadcast on the Artsound FM 92.7 ‘In the Foyer’ program on Mondays and Wednesdays at 3.30pm.
Posted by Canberra Critics Circle at 11:05 AM