The true story of Ophelia is a ripe, juicy fruit that has been hanging low for the picking for a very long time. Four hundred or so years, actually.

Other characters from Hamlet like Rosencrantz and Guildenstern have had their day on stage, but the tragic young woman who went mad when the Prince of Denmark rejected her, hasn’t had quite the same attention.

Sure, Ophelia has inspired novels and a multitude of references in art, literature and music since Shakespeare’s play was first performed, but this new feature film, based on a novel by Lisa Klein and directed by Claire McCarthy, takes her into the mainstream on screen with Daisy Ridley who is terrific here as the feisty heroine.

McCarthy is an Australian director whose previous work includes the sensitive and underrated film, The Waiting City, released in 2010.

Ophelia opens with that indelible image of her drowning in the river,  flowers floating around her as she sinks to her death. It references the famous painting by artist John Millais.

Once the moment on the river is past, a very different story begins to unfold in flashback in a Danish royal court where there is witchcraft, drug addiction and potions that people can use to play dead. While the state of the kingdom was a matter for debate in Shakespeare's Hamlet, here it is clearly rotten.


a street-smart Ophelia for the 21st century

Although Ophelia is noble born in Shakespeare, here she is a pert street kid dressed in sackcloth. An urchin who catches the eye of Queen Gertrude (Naomi Watts), who is not such a bad sort here, and she is brought into the royal household at Elsinore, to the delight of her ambitious father Polonius (Dominic Mafham). 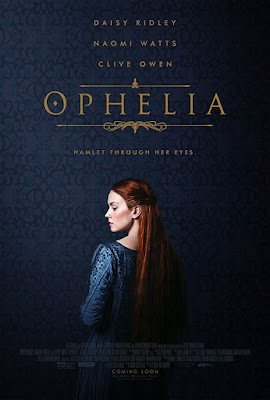 Ophelia’s new backstory hints broadly that as a young girl she learned some useful things about resilience. She will need it if she isn’t going to be a victim at the court presided over by the new king, Claudius (Clive Owen, in a terrible lank wig, looking suitably evil) who murdered his brother to gain the throne and delectable Gertrude.

Hamlet's character is necessarily backgrounded on this occasion but young British actor George MacKay still manages to put in a very good performance as the conflicted prince, fatally disillusioned, thoughtful and hesitant, losing his mind.

As a lady-in-waiting, Ophelia has become an auburn-haired beauty who is spirited, sexual and ultimately the agent of her own destiny. It is, after all, the only way her story can be told anew in the era of the  #MeToo era.


The young adult audience that Ophelia is aimed at will embrace this revisionist female protagonist and swoon over the gorgeous clothes and lush postmodern production design but won’t find it particularly compelling. Although Ophelia's story moves in some bold new directions, the unimaginative and prosaic writing by screenwriter Semi Chellas doesn’t make the most of its opportunities.

Now that this new Ophelia offers a fresh, 21st century take on her, we wonder why it has taken so long to rescue her from her long-suffering image, as the ultimate victim. And we wish that this key female figure had been resurrected with a stronger and wittier story.

If ‘to be or not to be’ was the question around the tragic heroine, we’ll have to wait for a better answer.

Jane's reviews are also published on her blog, the Film Critics Circle of Australia, and broadcast on ArtSound FM MHz 92.7
Posted by Canberra Critics Circle at 10:51 AM