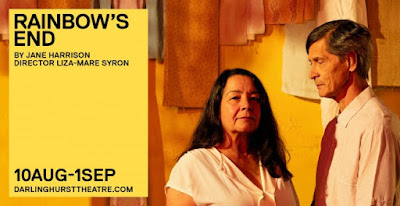 Photos by Robert Catto
Watching Rainbow’s End is like a 1950’s slide show.  Each short scene is a picture of a moment in the life of the Dear family women in the years from 1954 when the Queen of England made her Royal Visit to her British Subjects in Australia.  What a surprise in the first scene to see Gladys, daughter of Nan Dear, mother of Dolores, so excited and determined to dress up and walk all the way from her tin shack on the river flats into country town Shepparton to see the Queen.

But the Queen never saw Gladys’s home.  Officials had lined the road with a hessian fence to hide the Aboriginal settlement.  Her practical mother who sees her role as keeping things together wants to know what happened to the hessian.  But Gladys begins to change.

The slide show also reveals the unexpected story of Gladys’s youngest daughter, 17-year-old Dolores (Dolly) and Errol Fisher (Fleischer).  Dolly is ready to find her own way into a life which she deserves – with a decent house and a marriage to a decent man who loves and respects her as an equal.

Errol, almost a comic figure in his first slide appearance amateurishly selling Encyclopedia Britannica sets, turns out not to be a Fisher but a Fleischer.  His German immigrant parents had changed their name in World War II in British Empire Australia for obvious reasons.

As you watch and find yourself thinking about each scene, including those with a  threatening male figure hidden among the cork trees, and the change from a home-built tin shack to a government imposed cement slab house – but never a home – it’s clear the play is made for discussion, and it makes very good sense that it is included in the Higher School Certificate list for classroom study.

The original production of this play, by the Ilbijerri Aboriginal and Torres Strait Islander Theatre Co-op, directed by Wesley Enoch, took place at Shepparton in 2005, but since then there seems to have been only one other professional staging, at Riverside Theatre, Parramatta, and on tour in 2011, directed by Craig Ilott.  Jane Harrison won the 2012 Drover Award at this time.

It seems to me that we all, Indigenous, immigrant or whatever sort of Australian we are, should see this Moogahlin production – especially teachers and young people – because as the decades go along the issues of cultural differences never go away.  Attitudes have changed since 1954, perhaps, and the special value of this production in the friendly atmosphere of the intimate Eternity Theatre is that you come to appreciate the complexities of living in and between cultures; and seeing that positive outcomes are possible.

I think it is also important for non-Aboriginal people to understand the place of this play in the Australian theatre scene.

Liza-Mare Syron has a family history going back particularly to her uncle Brian Syron, who was such an important figure in the establishment of the Black Theatre in Redfern, Sydney in the early 1970s.  Her clan is Biripi, linked way back through the Eora people from long before the British invasion in 1788 and Captain Cook’s landing further south at Botany Bay in 1770.  The Queen’s Royal Visit, and the power Elizabeth II still represents in 2019, has a significance in First Nations history quite different from, say, my own immigrant history including going to Enfield (that is ‘End Field’) Grammar School established by Queen Elizabeth I in 1555 for the middle-class of her day, near the forests where she would go hunting.

Jane Harrison is a Muruwari woman related to the people who built the ancient engineered fish traps in the Barwon River at Brewarrina, far to the north-west of the Eora people, and was brought up in Yorta Yorta country in Victoria.  Rainbow’s End and this production of the play represents the expansion of Aboriginal modern theatre-making across the cultures of the many First Nations peoples – some 600 language groups in Australia and the Torres Strait Islands.

Take the opportunity, then, to see Rainbow’s End: to appreciate others’ experiences, to think about the implications, and to imagine a new future for our country.  Just take on board Gladys’s speech in the final scene.