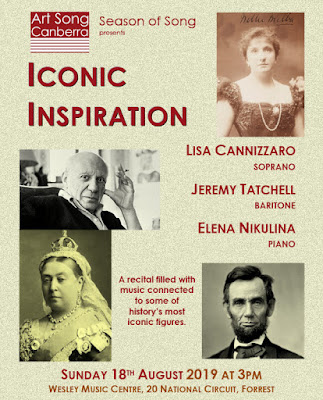 ‘Iconic Inspiration’ was an inspired idea for a program of art songs.  Choosing songs associated, directly or indirectly, with certain famous people added additional interest for the audience as the program proceeded.  The singers presented an appealing mix of songs from various composers including Mozart, Poulenc, Copland, Wagner, Britten and even Cole Porter and Gilbert and Sullivan.  This was an especially fine concert with many highlights.

Lisa Cannizzaro, soprano, graduated from the Elder Conservatorium of Music and began her professional career in 2007 with South Australian touring company, Co-Opera.  She has also sung several minor roles with the State Opera South Australia and has won several prizes for singing.

Jeremy Tatchell completed performance studies in viola and voice at the ANU School of Music in 2001.  He has performed with Co-Opera and the State Opera of South Australia and enjoys a busy oratorio and recital career.

Elena Nikulina graduated in 1999 from the Donetsk State Conservatoire, Ukraine, with a Master’s degree in pianoforte and accompaniment.  She has performed extensively overseas and, since moving to Canberra in 2006, as well as continuing to perform and accompany artists, she has won awards as a high-level piano teacher.

Early in the concert, Lisa Cannizzaro sang two songs by Aaron Copland – ‘Simple Gifts’ and ‘At The River’ - with a quiet assurance that gave these well-known songs an extra emotional dimension.  She then quickly changed the mood to the fireworks of ‘Clavelitos’ by Joaquin Valverde.  Her clear diction in this fast-paced song was especially notable.

Jeremy Tatchell sang four Don Quichotte songs by Jacques Ibert with a fine sense of dignity and grandness that matched the subject.  His ability to sustain some very low notes in the songs was impressive.

Other highlights of the concert included Poulenc’s ‘Les Chemins d’amour’ sung with great warmth by Lisa Cannizzaro and dedicated to Picasso.  Six Australian bush songs by William G. James, dedicated to Nellie Melba, were beautifully sung alternately by the singers and there was an especially fine accompaniment by Elena Nikulina.  The duet ‘La ci darem la mano’ by Mozart was an excellent showcase for the blend of the two singers voices.  Jeremy Tatchell sang a heartfelt ‘O du mein holder Abendstern’ by Wagner and Liza Cannizzaro movingly sang Britten’s ‘The Salley Gardens’.

Len Power’s reviews are also broadcast on the Artsound FM 92.7 ‘In the Foyer’ program on Mondays and Wednesdays at 3.30pm.
Posted by Canberra Critics Circle at 7:42 AM