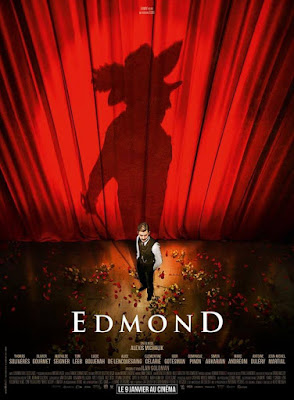 Written and directed by Alexis Michalik

A movie based on real incidents and characters might not be historically true but sometimes you wish it was.  Such is the case with ‘Edmond’, a hugely entertaining film from start to finish.‘Edmond’ is a 2019 French dramatic comedy written and directed by Alexis Michalik.  It’s an adaptation of his highly successful 2016 play of the same title, which premiered in Paris in 2016.

In 1897 in Paris, the struggling young poet-playwright, Edmond Rostand, impetuously offers a role in a play to the famous actor, Constant Coquelin.  The only problem is that the play is not yet written.  He only has a title – ‘Cyrano de Bergerac’ – and only three weeks to complete it.  Distracted by the love stories of his best friend, temperamental actresses, the jealousy of his wife and the lack of enthusiasm of those around him, Edmond tries to write this play in which nobody believes.

The recreation of theatre life in 1890s Paris in this film is masterful.  Chaos reigns backstage with the casting of plays often for reasons other than skill or talent.  Temperamental stars rule the day and companies seem close to being shut down for financial and other reasons.  Against all odds, Rostand emerges triumphantly with a play that stands the test of time.

The performances in this film are delicious.  At the centre of the film, Thomas Solivérès gives an endearing performance as the anxious Edmond Rostand.  Olivier Gourmet is a charismatic Constant Coquelin, the first actor to play Cyrano and Maria Legault is delightful as the temperamental actress, Mathilde Seiner, playing the love interest, Roxanne.  The handsome Tom Leeb is perfectly cast as the actor Léo Volny who plays the dashing but not very bright young lover, Christian.

Sarah Bernhardt, played with all stops out by Clémentine Célarié, darts in and out of the film as does Georges Feydeu, the famous French farce playwright, played by the director of the movie himself, Alexis Michalik.  A huge cast of character actors give great support to these leading performers.

It’s not surprising that many situations detailed in the play are inspired by Rostand’s day to day experiences with these colourful characters.  It’s great fun seeing how he incorporates them along the way.  It’s not necessary to know the play in detail but, if you do, you’ll have a wonderful time recognizing these incidents.

One of the highlights of this film is a laugh out loud scene involving a hotel reception clerk that is pure Feydeu farce.  Surprisingly, it’s a hapless Georges Feydeu himself who is caught up in it!

If you love theatre and the colourful characters that inhabit it, don’t miss this one.  It’s a joy from start to finish.