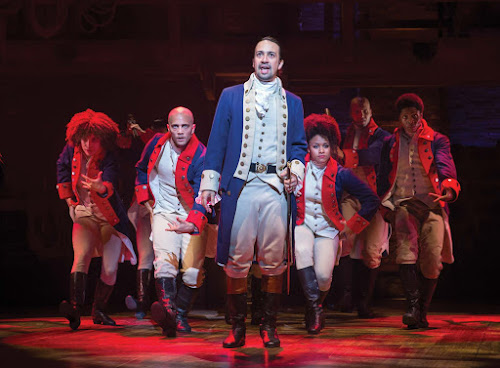 Since Hamilton premiered on Broadway in 2015 It’s been showered with awards, including 11 Tonys,  and has quickly become a world-wide phenomenon. Though the Broadway production is currently closed because of the Covid-19 restrictions, the Australian production of Hamilton is, at last reports, still scheduled to open in Australia in 2021.

As part of the American 4th July Celebrations, Disney Plus has released a film of Hamilton,  made in 2016, which features the original Broadway Cast, which it is streaming in Australia from 3rd to 7th July, and  which, thanks to the American Embassy in Canberra, I was invited to view.

Deliberately ambiguous, with a cast of non-white actors portraying America’s founding fathers and other historical figures, brilliantly designed costumes that suggest historical accuracy without actually being so, and scenery on revolving stages constantly materialising on the brilliantly lit stage,  Hamilton tells the story of founding father, Alexander Hamilton, by detailing major events in his life through a fusion hip-hop, soul, R & B, and conventional show tunes.

The concept and execution of the show is breathtaking.  Its sheer pace and complexity is both exhausting and exhilarating. Your eyes are continually tantalised by swirling figures, magnificent costumes and striking lighting effects, while your ears strain to capture every syllable of the brilliant dialogue, delivered at break-neck speed, by the ever-changing milieu of characters, appearing, and then disappearing as seamlessly as they arrived.

While you don’t have to be student of American history to follow the plot, it would certainly be an advantage. Otherwise it’s unlikely that many non-Americans will fully appreciate the historical nuances which abound, or recognise many of the historical characters being portrayed. The colour-blind casting offers little assistance in this regard, and no doubt, watching it in a theatre, the significance of many of the plot details are likely to escape.

Despite this, the brilliant staging, the intensity of the performances and the choreographic spectacle, are more than sufficient to stamp Hamilton as a “must see” musical experience.

Being familiar with most of the lyrics from my CD of the show, I thought I had heard everything significant, first time through. But the surtitles were a revelation. Miranda’s extraordinary facility to manipulate words, and rhymes, to match, exactly, the complex personalities of each of his characters, is captivating, and part of the appeal of the show.

But, as anyone who’s been to an opera quickly realises,  there is so much more to be discovered with the assistance of surtitles. In the case of Miranda’s marvellously complex lyrics, it’s tantamount to rediscovering the brilliance of the show for the first time.

Another advantage of this excellent film is that it captures for posterity the performances of the original Broadway cast. These performances will become the templates for the actors who succeed them in the many productions this show will inevitably spawn around the world.

Included among these performances is that of the creator of Hamilton, Lin-Manuel Miranda, who, besides being one of the producers, and providing the book, music and lyrics, also plays the title role of Alexander Hamilton in this production. His is an impressive performance, but it will be interesting to see other actors interpret this role.

There are many other strong performances, including that of Leslie Odom Jr., who plays Aaron Burr, Hamilton’s rival, and ultimately, his assassin.  Daveed Diggs as Thomas Jefferson, and Renee Elise Goldsberry as Angelica Schyler, Hamilton’s sister-in-law, both give commanding performances, while Phillipa Soo brings a captivating mixture of fragility and strength to the role of Hamilton’s long-suffering wife, Eliza.  Christopher Jackson also impresses with the dignity and warmth of his characterisation of George Washington.

But for this reviewer, the element of this production that burns itself into the memory is the  precision and recklessness of the superb ensemble which stunningly executes  Andy Blankenbuehler’s mesmerising choreography to provide a constantly moving frame for the central performances. I can’t wait to see Hamilton in a theatre.

This review also appears in Australian Arts Review. www.artsreview.com.au
Posted by Canberra Critics Circle at 11:35 AM