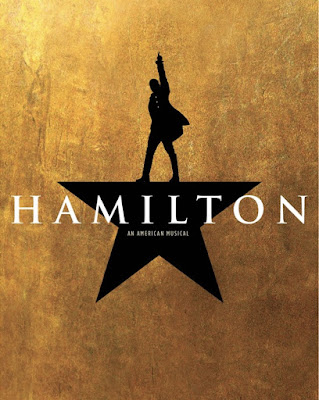 ‘Hamilton’, the musical with book, music and lyrics by Lin-Manuel Miranda was inspired by the 2004 biography ‘Alexander Hamilton’ by Ron Chernow. It opened on Broadway in 2015 to great critical and audience acclaim, winning 11 Tony Awards and the Pulitzer Prize for drama. Since then it’s become a ‘must-see’ phenomenon and is due to be staged here in Australia in 2021.

The Broadway production with its original cast was filmed live on stage in 2016 for an expected theatrical release in 2021. However, the Disney + streaming platform reportedly paid $75 million dollars for the rights to show it world-wide from the 4th of July this year.

It tells the story of American Founding Father, Alexander Hamilton. He’s pushy and abrasive which is OK because he’s just following the American Dream and, when he gets shot dead at the end of the show, we’re meant to feel sorry that his dream was shattered.

The music of the show draws heavily from hip hop, as well as R&B, pop, soul, and traditional-style show tunes. It also casts non-white actors as the Founding Fathers and other historical figures. This gives the show an added interest but it’s hardly revolutionary. Anachronistic music scores are not new and colour-blind casting has rightly been around for a while now.

It’s superbly performed by the large cast, all of whom sing the very tricky score extremely well. The direction by Thomas Kail keeps it all fast moving and it looks terrific – colourful and full of life. The lighting plot is extraordinary, creating fast changes in atmosphere and mood. There is constant choreography in the background by accomplished dancers that adds to the energetic feel and excitement of the show.

The lyrics are especially smart and incisive. Not a big fan of hip-hop, I found that aspect of the music repetitive and wearying, especially in the second act. Occasional flashes of harmony and various changes in music styles were a welcome relief.

If you are not familiar with this period of American history, it can be confusing to keep track of many of the characters being played by non-white actors. I can understand Americans finding the subject matter enthralling as it celebrates their own history but I wonder how interesting it will really be for Australians and others around the world.

There has been a vast improvement over recent years filming live shows for broadcast on television. The filming and editing of ‘Hamilton’ is excellent.
I was satisfied to see the show via streaming. It’s a fine show but not emotionally involving and I can’t see why it’s considered such an outstanding event when compared to other successful Broadway shows of the past few years.