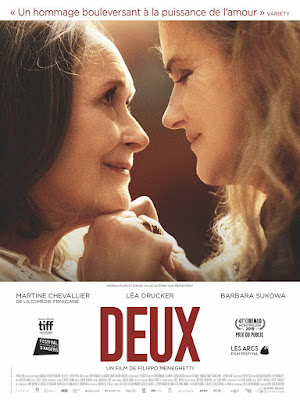 Two elderly women, Nina and Madeleine, have had a secret relationship for many years.  To maintain their relationship after Madeleine suffers a debilitating stroke, Nina negotiates a perilous path between Madeleine’s unsuspecting grownup children and an increasingly suspicious employed carer.

This moving film, directed by Filippo Meneghetti, shows the difficulties than can arise when participants in a same-sex relationship feel the need to keep it hidden from the world.  Suddenly losing access to a loved one would be unbearable enough, but having to keep quiet about your feelings as well would be isolating and intolerably painful.

Nina and Madeleine have lived for years on the same floor of an apartment block and, to Madeleine’s family, Nina appears to be just a concerned neighbour.  After the stroke, Nina’s offer to help with her partner’s care is rebuffed, leading her to make secret nocturnal visits into Madeleine’s apartment while her 24 hour carer is sleeping there.

These stealthy apartment visits add a high level of suspense to the film as we hold our breath waiting to see if Nina will be caught.  Nina’s love for Madeleine forces her go to extraordinary lengths to maintain access to her.  As Madeleine slowly recovers, it’s clear that Nina’s secret contact with her is aiding her recovery.  When a family member discovers the truth about their relationship, their negative reaction threatens to undo the fragile recovery process.

At the heart of this film are two very fine performances by Martine Chevallier as Madeleine and Barbara Sukowa as Nina.  In the early part of the film, Chevallier is very convincing in her anxiety to hide her secret relationship from her family and, later, as a stroke victim slowly recovering some of her faculties, she gives a subtle and carefully measured performance of great realism.

Nina is the more outgoing of the two women and, in her performance, Barbara Sukowa gives her an obsessive dynamism that we fully understand.  The luminous portrayal of her love for Madeleine is stunningly real.

There is fine support from Léa Drucker as Madeleine’s daughter, Anne, and Muriel Bénazéraf as the increasingly aware care-giver.

This a fine first feature film from director, Filippo Meneghetti.  It’s gripping and suspenseful as well as moving and insightful into the impact that people’s attitudes towards relationships can have on everyone concerned.

‘Two Of Us’ is one of the films that will be showing in the 2020 Alliance French Film Festival in Canberra at the Palace Cinemas from 14 July to 4 August.