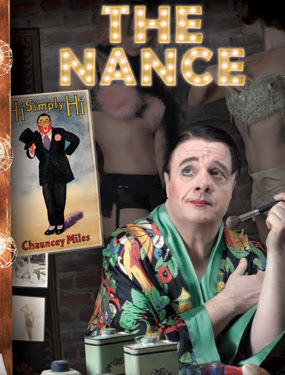 Written by Douglas Carter Beane, ‘The Nance’ focusses on the lives of a group of burlesque performers in a New York theatre during the 1930s.

Burlesque was an entertainment that was popular in the USA from the 1860s to the 1940s in cabarets and clubs as well as theatre.  Presented in a variety show format, it featured bawdy comedy and female striptease.  Many famous comedians such as W.C. Fields, Eddie Cantor and Phil Silvers honed their skills in burlesque before going on to fame in legitimate theatre and movies.

A ‘nance’ was an exaggerated effeminate homosexual comic character in burlesque.  The character had to tread a dangerously fine line between suggestive humour and the law at the time.  Police raids on burlesque in the late 1930s, when the play is set, were becoming increasingly common at that time.

Nathan Lane plays Chauncy Miles, the nance at a New York burlesque theatre.  Gay in real life, Chauncy meets Ned, a young man recently arrived in New York and commences a relationship with him.  After years of furtive meetings with random men, Chauncy finds it hard to commit to a relationship with Ned who clearly loves him.

The story of this couple is punctuated with classic burlesque performance on the stage of the theatre where Chauncy works.  Nathan Lane is superb in the nance comedy sketches.  His energy, rapid fire line deliveries and sense of timing are breath-taking.  His performance is reminiscent of Lou Costello of the comedy duo Abbott and Costello, who also started in burlesque.

Lane is equally adept at the dramatic side of the story, showing every facet of a bitter, unhappy man unable to accept or return affection and using sarcastic humour to push people away from him.

This is a star vehicle for Nathan Lane and he is given excellent support by Jonny Orsini as Ned and Cady Huffman, Andréa Burns, Jenni Barber, Lewis J. Stadlen, and Geoffrey Allen Murphy as other burlesque performers.

Director, Jack O’Brien, incisively points up the contrast between the onstage and offstage lives of these characters, obtaining performances of great depth by his cast.

A detailed revolving set designed by John Lee Beatty shows the stage of a burlesque house, its backstage area, and Chauncey's apartment and Ann Roth has provided great period on and off stage costumes.

The opportunity to see Nathan Lane’s powerful, award-winning performance at the heart of this fascinating play about the burlesque era is not to be missed.  It’s currently available for viewing on YouTube.