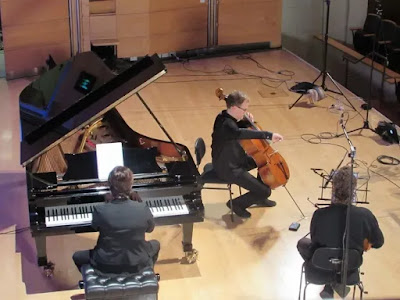 While the critics were divided in their opinions about Beethoven’s debut piano performance in March 1795, perhaps the most evocative account was written by virtuoso viola da gamba player and composer, Johannes Schenk when he described Beethoven’s playing:

It had the clarity of daylight at high noon! Casual figures developed into rich motifs, full of truth and beauty. Suddenly he changed into an entirely different key and expressed the most violent passion. More gentle modulations led in turn to a divine melody, and now, the bewitching tones of the piano became melancholy, playful and with a touch of roguery…. his playing was as superb as his inventiveness.

Selby and Friends captured the essence of the young Beethoven in this, the third concert of their 2020 season. A fresh addition to the ensemble was young violinist Harry Ward, who brought a combination of confidence and daring with his appearance. Timo-Veikko Valve is one of those extraordinary musicians who seems to have the notes leap towards him willingly from the instrument without seeming to expend too much effort. His touch on the finger board appears light and the arrow-sharp aim of his bowing leaves no room for slips or inaccuracies. Kathy Selby was at ease as piano anchor despite Beethoven’s demanding transcription of the Second Symphony piano trio.

This concert was filmed on the stage of the City Recital Hall, and the quality of the sound and the close-up photography was impeccable; the balance between the instruments perhaps the best I have heard for the line-up.  An on-line concert is an intriguing experience, as the proximity of the camera to the musicians suggests intimacy, but of course, the musicians are at an un-bridgeable distance from their audience. There may be a whole new area of academic inquiry into musical reception launched by the upsurge of online concerts stimulated by the pandemic!

The Trio Op.1 No.3 was a fitting beginning, with the seductive opening phrase leading onward from Ward’s violin into the body-swaying waltz-time melody embraced by the ensemble. There was a nice rapport between violin and cello and the tone of the instruments blended sympathetically - the stately opening chords rolling into a rollicking Allegro con brio tinged with a hint of Beethoven’s ‘roguery’. Following on, the Andante cantabile had a psalm-like beauty and equanimity, contrasting with the lively third movement Menuetto and resolution into a rousing final movement.

Beethoven’s reworking of his Second Symphony into a piano trio was a shrewd move creatively and financially. His admirers could hear and play the stirring composition in a new and more intense form. The dramatic dynamic and tempo contrasts worked extremely well in the smaller ensemble setting and Selby and Friend’s interpretation featured passionate interactions between the stringed instruments and a piano commentary varying from delicate remarks to emphatic interjections – as Schenk described, ‘rich motifs, full of truth and beauty’.

In the second, slow movement of The Ghost, we heard the loveliest moments of the concert. The Largo creates a sanctuary in the structure of the Trio, a reflective space after the energetic scalic passages of the opening movement leading into the Presto final movement – on this occasion played at a spacious and lively tempo with warmth and tenderness.

While we all look ahead to the return of live music concerts, we will remember these performances by Selby and Friends as oases in the strange 2020 world of Covid-19.