This exhibition focuses on the impact of human activity, and the role of the arts and photographic media, exploring the period during which scientists say we have significantly altered the Earth. The changes include global warming, habitat loss, altered chemical composition of the atmosphere, oceans and soil, and animal extinctions. Addressing all of that is a huge challenge, but one that the artist has tackled imaginatively.

What do embryos, intestines, bogongs and a koala paw have in common? They’re all animal specimens, mostly from the National Museum of Australia’s collection that some of us will remember seeing in jars at the old Institute of Anatomy. Vic McEwan has photographed the specimens and then projected his images onto diverse surfaces to create new still and video images.

Selection of projection sites was important in telling the story. Sections of old walls along the River Thames during periods of low tides. Plymouth walls dating from the time of Cook’s voyages of discovery. An ancient fort in Portsmouth, from where the First Fleet departed. 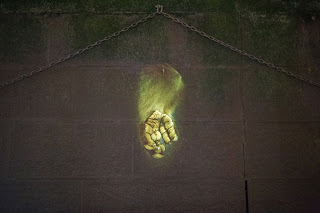 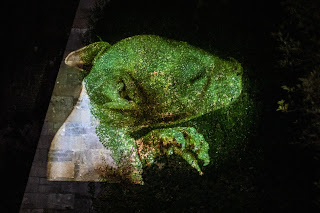 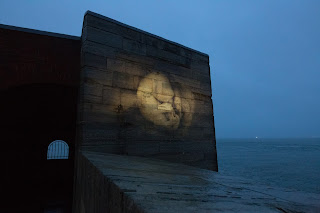 The Arthur Phillip monument in the centre of London displays a wonderful image of lizard intestines. McEwan rightly suggests they look like a big bunch of balloons. This is intimate, being only a 40 or 50 cm wide projection, quite different from the other images.

One specimen is a monkey’s head – a curious collection item as monkeys are not native to Australia. Foliage in the form of ivy appears on one projection wall. Two animals in one jar – a love story? Each element of every image contributes to the complex story that is shared with us.

The projections in England were done using a small handheld projector with its batteries charged in Australia using solar power. More connections! Back in Australia at Narrandera, on the Murrumbidgee, and close to McEwan’s own house, he used a much more powerful projector – takes 4 people to carry it – because of the projection distance.

In the second gallery, images show the same body of specimens projected onto smoke during the recent Summer of bushfires. Again, this is about the consequences of the way European colonisation has impacted on Australia – millions of animals have died because of fires and smoke. The specimens are not recognisable in these – to viewers who do not have the artist’s knowledge of them. He accurately describes the result as “paintings” in projected light. They would stand alone as images if we knew nothing of their purpose here. A much bigger catastrophe is represented in these strong works.

Then there are three images of bogongs from a CSIRO collection – taken at Mt McKay in Falls Creek. Scientists are trying to find out why bogongs have disappeared from there in recent years. So, the artist used projections to return moths into that landscape.

In the third gallery space I thoroughly enjoyed a three-act video work made from materials gathered during the project. Almost hosted by lizard and kangaroo specimens, it steps through the chronology from departure of the First Fleet through to the current day’s consequences. The video soundtrack also was made on the sites of the projections. We hear the artist playing the Arthur Phillip monument with a bow and extracting bell sounds from the bars in windows of the old Plymouth fort. Sonically mined from the time when they were built.

McEwan speaks about his work in a 37 minutes recording. This “photo-story” is available on the Photo Access online gallery and is an excellent audio guide if used when walking through the exhibition.

This review was also published in The Canberra Times and in Brian Rope Photography’s blog at https://brianropephotography.wordpress.com/, both on 11 July 2020.