"FROM UKRAINE WITH LOVE" 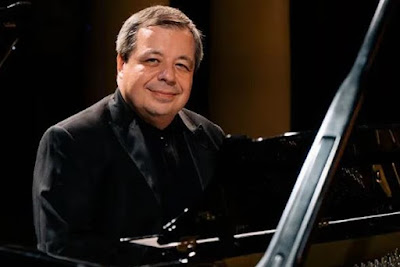 Live At Yours production

The B, Queanbeyan, 21 September

In a show of solidarity for the people of war-torn Ukraine, The B in Queanbeyan was almost full for an extraordinary concert of deeply romantic music by Ukrainian pianist, Alexey Botvinov.

Regarded as a leading specialist in the music of Rachmaninov, he is also President and Artistic Director of the “Odessa Classics” international music festivals which were held in cities outside Ukraine for the first time this year.

Since Russian forces invaded Ukraine, he has performed across Europe, raising €1.5 million for his country so far.  Although from Odessa, he is currently living in exile in Zurich, Switzerland.  The proceeds from the concert will be used to support the artist and his family in Ukraine.

Introduced by Odessa-born entrepreneur, Vladimir Fanshil, whose company Live At Yours has funded the Australian tour, Alexey Botvinov presented as a quietly friendly, unassuming kind of bloke with a warm smile.  When he began playing the piano, you quickly realized that this was no ordinary man.  He was clearly a master of the instrument and a superb artist and performer.

Commencing with three Intermezzi by Johannes Brahms, Botvinov then played two well-known Nocturnes by Frédéric Chopin.  He followed this with “Ave Maria” by one of his favourite Ukrainian composers, Alemdar Karamanov.

All were beautifully played but it was the final item on the program that really showed what an extraordinary performer he is.  Rachmaninov’s Sonata No. 2 is considered notoriously difficult to play but Botvinov gave a towering performance of the work, bringing out a depth and clarity in the music that was breath-taking.

For an encore, he played the beautiful “Melody” by Ukraine’s Myroslav Skorik and then delighted the audience with an unexpected second encore.  His playing of Rachmaninov’s “Prelude in C minor” was thrilling and a perfect end to this memorable concert.

This review was first published in the Canberra CityNews digital edition of 22 September 2022.